Microsoft today announced the first preview of x64 emulation for Arm PCs, with the feature now available to Windows Insiders in the Dev Channel. That means Windows users who have Arm PCs like the Surface Pro X can now install apps that have not been ported to Arm64. 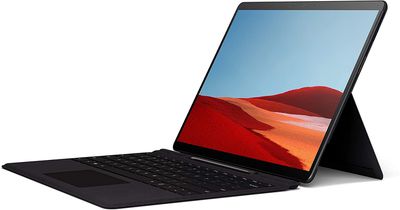 When we first launched Windows 10 on ARM in late 2017, the long tail of apps customers needed were dominated by 32-bit-only x86 applications, so we focused our efforts on building an x86 emulator that could run the broad ecosystem of Windows apps seamlessly and transparently. Over time, the ecosystem has moved more toward 64-bit-only x64 apps and we've heard the feedback that customers would like to see those x64 apps running on ARM64. That's why we are working on expanding the capability of our emulation to include x64 applications and sharing this first preview to gather feedback.

Microsoft says that while it is expanding the capabilities of its emulator, it recommends that developers implement native Arm support for the best possible app experience.

In the new preview, Windows users can install x64 apps from the Microsoft Store or from other locations, with Microsoft highlighting the availability of x64-only apps like Autodesk Sketchbook and games like Rocket League. Other apps will benefit from being run as 64-bit instead of 32-bit, such as Chrome.

Microsoft says that the new emulation feature is still in the early stages of testing and will continue to improve in compatibility and performance over time, and some of the apps that are run in emulation may not work initially.

Users who are expecting a smooth emulation experience should not get their hopes up because as The Verge points out, Microsoft's prior emulation work has not been fantastic, with apps loading and running slowly.

Microsoft has not been able to match Apple's work with Rosetta 2, which is designed to allow M1 Mac users to run Intel-based apps on their machines. Rosetta 2 has proven to be streamlined and speedy, with none of the emulation complaints that Microsoft has faced.

Though an Arm version of Windows is available for PCs, Windows is not compatible with Apple's ‌M1‌ Macs due to licensing issues. Microsoft only provides Windows 10 on Arm to PC manufacturers to preinstall on their hardware and does not offer a consumer version.

0%: Chance that Microsoft will make Windows run on Apple Silicon.

It's almost 2021. This is basically like saying there is 0% chance MS SQL Server will run on Linux. Ubuntu won't run on Windows/HyperV. Powershell for Linux. The list goes on.

Microsoft finally realized that they aren't going to control what the end user buys. They can either play nice and have tons of users or not play nice and never reach certain users. Microsoft absolutely wants you to still run Windows if you have a Mac.

This article and a lot of commenters are pretty biased. I'm already doing some tests with Win10ARM on my M1 Mac. 32-bit applications are running surprisingly well (Not perfect but plenty functional). Comments saying Microsoft are copying Apple are pretty darn laughable. You think Microsoft threw this together in a couple months? This has been an ongoing project for a long time. ARM has reached a point where it has enough power for both Apple and Microsoft to really start exploring these translation paths to embracing ARM.

I honestly didn't know they were adding 64-bit support too. This isn't Windows RT anymore this is a real player. If they do get it running in bootcamp I can already tell you from the little bit I've played with the VM its going to be a serious grandslam with the best of both worlds.

zorinlynx
Microsoft should package up a "Microsoft Windows for Mac" software package. It would include Windows 10 and a high quality hypervisor that would let you run Windows 10 ARM alongside MacOS at full performance on the new M1 Macs. it would of course include this emulation technology so x86 apps can be run as well.

This would actually be quite a money making opportunity for MS, to sell Windows to Mac users who absolutely need it for whatever reason. Done right it would have near-native performance and be far superior to previous solutions like VMWare's.
Score: 28 Votes (Like | Disagree)

And what would you do with it, seriously? Install it on your Raspberry Pi? What for?

If they sold it for $99, the M1 MacBook Air would instantly become one of the best Windows PCs on the market. PC buyers would also benefit, because QualComm, AMD, and others with ARM licenses might see a reason to build more custom chips to compete with Apple.
Score: 14 Votes (Like | Disagree)
Read All Comments

Friday November 20, 2020 11:57 am PST by Juli Clover
Following the release of the M1 Macs Apple executives have been doing interviews with a range of publications, and today, Ars Technica published another interview with software engineering chief Craig Federighi, hardware technologies lead Johny Srouji, and marketing VP Greg Joswiak. Much of the interview focuses on topics that the three have already covered in prior discussions, but there is ...
Read Full Article • 286 comments

Friday February 12, 2021 8:43 am PST by Hartley Charlton
U.S. chipmaker and Apple supplier Qualcomm has told regulators around the world that it opposes Nvidia's $40 billion proposed acquisition of Arm, according to CNBC. Qualcomm has registered an objection to Nvidia's acquisition of Arm with the Federal Trade Commission (FTC), the European Commission, the UK Competition and Markets Authority, and China's State Administration for Market...
Read Full Article • 104 comments

Friday November 27, 2020 7:16 am PST by Hartley Charlton
Developer Alexander Graf has successfully virtualized the Arm version of Windows on an M1 Mac, proving that the M1 chip is capable of running Microsoft's operating system (via The 8-Bit). Currently, Macs with the M1 chip do not support Windows and there is no Boot Camp feature as there is on Intel Macs, but support for Windows is a feature that many users would like to see. Using the...
Read Full Article • 111 comments

Thursday January 14, 2021 4:31 pm PST by Juli Clover
Apple is working to bring Music and Podcasts apps to the Microsoft Store, according to a report from 9to5Mac that cites unnamed sources. Apple is allegedly testing Music and Podcasts apps for Microsoft's platforms in a private beta capacity at this time. There is no word on whether the apps will be compatible with Windows PCs or if they are being developed for Microsoft's Xbox consoles....
Read Full Article • 46 comments

Thursday April 22, 2021 1:21 am PDT by Tim Hardwick
Microsoft Teams for macOS has been updated so that other people on a video call are able to hear a Mac's system audio when another user is screen sharing. Teams for Windows has always offered users the option of system audio sharing. Today's update brings parity to the Mac app by including the optional feature, which is likely to be welcomed by teachers and businesses. Microsoft also says ...
Read Full Article • 72 comments