Apple has filed a patent application for an intense light-absorbant matte black finish for a range of products, including the iPhone, iPad, Apple Watch, and MacBook (via Patently Apple). 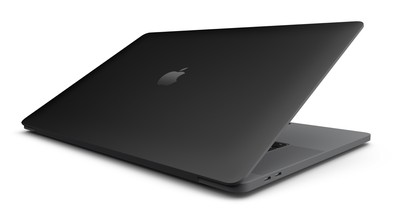 The patent application, filed with the U.S. Patent and Trademark Office, is titled "Anodized Part Having a Matte Black Appearance," and outlines the characteristics of the finish and possible manufacturing processes to achieve it. The patent notes that the finish can be used on a range of metals and metal alloys, including aluminum, titanium, and steel.

The finish comprises an anodized layer that includes "randomly distributed light-absorbing features that are capable of absorbing visible light." The layer contains pores, "where color particles are infused within the pores." The resulting surface is a deep, intense matte black.

A genuine black color is extremely difficult to achieve, with most commercial "black" products actually being dark gray or blue. The patent explains that "merely depositing dye particles within pores of an anodized layer is insufficient to impart a true black color."

One of the issues involved is that, generally, the truer the black, the higher the gloss of the finish, which in turn reflects a large amount of visible light. In etching the surface of an anodized layer with pores, Apple is able to absorb "generally all visible light" to deliver a truer black finish without increasing glossiness.

Apple's solution appears to be tantamount to existing true-black solutions such as "Vantablack," which is one of the darkest substances known, absorbing up to 99.965 percent of light.

Although there are other options such as skins, Apple has never offered a matte black MacBook. The company has experimented with a number of matte black finishes on other products, however, such as the ‌iPhone‌ 7.

Patent applications cannot be taken as proof of what Apple is intending to bring to market and many patented ideas never reach the shelves. Nonetheless, they provide an interesting insight into what Apple is researching and developing behind the scenes.

ArPe
Vanta Black would be a massive distraction. Instead of getting work done you’d be constantly mind ****ed.

And lose your laptop in the dark.

vmac556
I consider the original, black MacBook to be matte black
Score: 21 Votes (Like | Disagree)
Read All Comments

Sunday January 17, 2021 9:47 am PST by Hartley Charlton
Twitter user @DongleBookPro has today shared images of a prototype iPhone 5s in an unreleased Black and Slate color. The iPhone 5s was launched in September 2013. The device featured Touch ID, a 64-bit processor, and a True Tone LED flash for the first time. Other new features included a five-element lens with an f/2.2 aperture, a 15 percent larger camera sensor, Burst Mode, and Slo-Mo...
Read Full Article • 62 comments

Tuesday March 23, 2021 5:45 am PDT by Hartley Charlton
Apple is researching a potential radical redesign for the Apple Watch, including a rounded watch face, wrap-around flexible display, and digitally-customizable watch bands, according to a newly-granted patent filing. The patent, spotted by MacRumors earlier today, is titled "Display Module and System Applications" and was filed with the United States Patent and Trademark Office. The...
Read Full Article • 92 comments

Thursday March 25, 2021 9:07 am PDT by Hartley Charlton
Apple is researching the use of "deployable feet" on the MacBook Pro to aid cooling, according to a newly-published patent application. The patent application, first spotted by Patently Apple, is titled "Deployable Feet for Display Articulation and Thermals Performance" and outlines how a MacBook Pro could feature feet that move to raise up the rear of the device. Apple's deployable feet...
Read Full Article • 101 comments

Thursday March 18, 2021 8:00 am PDT by Hartley Charlton
Apple is refining its as yet unused under-display fingerprint scanning technology, seemingly ahead of bringing Touch ID back to the iPhone, according to a newly-published patent application. The patent application, first spotted by Patently Apple and filed with the United States Patent and Trademark Office, is titled "Under-display fingerprint sensing based on off-axis angular light" and...
Read Full Article • 104 comments