All of the M1 Mac models use the same ‌M1‌ chip, so the upgrade options are limited to SSD storage space and RAM. We haven't seen many comparisons that demonstrate the difference between a machine with 8GB RAM and the upgraded 16GB RAM option, but Max Tech today shared a video highlighting the performance between an 8GB MacBook Pro and a 16GB MacBook Pro.

A Max Tech Xcode benchmark that mimics compiling code saw the 16GB model score 122 compared to the 136 scored by the 8GB model, with the lower score being better. 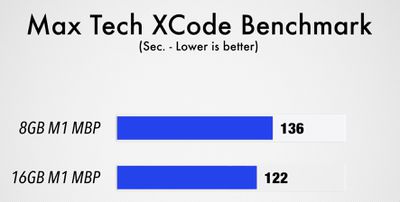 Small differences were also seen in a 4K export test and a Lightroom Classic RAW export test, but the results were quite close, coming down to 17 seconds in the Lightroom test. The 16GB model even beat out a $2,300 iMac.

Max Tech's video is worth watching in full for those who are trying to decide between a machine with 8GB RAM and a machine with 16GB RAM. There appear to be some minor performance differences when it comes to benchmarks, especially with system intensive tasks, but in day to day usage, the 8GB model holds up well and most people may not need the 16GB upgrade.

LeadingHeat
This is exactly what I was looking for, thank you MR! Was debating on getting the 16GB Mac mini but it may be good enough with just 8GB!

Second thought, might as well get the 16GB for future proofing.

But then what if I don’t actually need it and it’s a waste? Here we go again
Score: 38 Votes (Like | Disagree)

In most of the benchmarks performed on 8GB M1 machines, if Activity Monitor is shown, the swap space usage is always between 2,5GB and 4GB or even more. In my 10 years of being a mac user, I’ve never seen such big swap space being used unless I’m stressing my machine heavily, and that usage may be aging your SSD.

I have my choice clear, 16GB, even if it’s just for future-proofing my purchase.
Score: 33 Votes (Like | Disagree)

You buy this today tomorrow they will release new one then another new one ,goes on and on .This all waste of money and trap from Apple
I Just get top of the line current 13”2.3 GHz i7,32 Gb,1 Tb that’s it i also have 16”2.4 GHz i9,32 Gb,2 tb
Both works well and i can do whatever i wanna do with them
Plus I have loaded 2013 Mac Pro desktop
All this will let me do my job for next 5 years or more
Why should i sale my Macs to get this M1 ?
You can’t win this Apple win :) they want u to spend all your money lol

What a ridiculous post. The same can be said with Dell, HP, Lenovo and Microsoft. Your trolling isn't helpful here.
Score: 29 Votes (Like | Disagree)

coolbreeze
The base Air w/8gig is an absolute monster for the price.

And I didn't want to "future proof" (lol) a rev.A machine...wanted the lowest possibly entry price and will of course buy the M3x or whatever in 2 or so years. I think I'm going to offload my Thinkpads....that's how good this machine is.
Score: 27 Votes (Like | Disagree)

mikethebigo
I really think this is a bad video, or at least a misleading one. He never really looks at swap space, and he doesn't go over fast app switching, which is a far more common use case than the intense CPU benchmarks he uses. Beware, when your M1 Mac is using swap, there is a brief bit of lag and "pop in" when you go back to programs you haven't used in a while. I exchanged for a 16 GB model and that problem disappeared. It's not a huge deal, but I hate when active programs are doing a bunch of swapping.
Score: 25 Votes (Like | Disagree)

This is exactly what I was looking for, thank you MR! Was debating on getting the 16GB Mac mini but it may be good enough with just 8GB!

Second thought, might as well get the 16GB for future proofing.

But then what if I don’t actually need it and it’s a waste? Here we go again