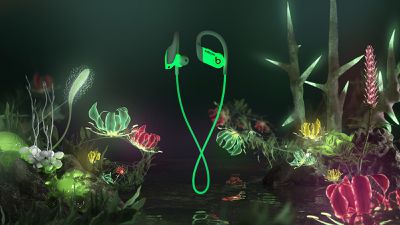 The special-edition Powerbeats, conceived by AMBUSH co-founder and creative director Yoon Ahn, are pale green with a prominent red Beats "b" logo and smaller "AMBUSH" branding. In the dark, the main bodies of the earphones and the cable linking them glow green.


Yoon Ahn, the co-founder and creative director for Tokyo-based label AMBUSH®, is known for her non-traditional, unisex designs that elevate every-day objects and merge together unexpected elements of streetwear, jewelry, luxury fashion and the local subcultures of her city. With this partnership, Yoon was inspired by the creative spark that can come from your nocturnal side -- especially when living in a city like Tokyo, which comes to life at night with a particular energy.

Aside from the glow-in-the-dark capabilities, the AMBUSH Powerbeats themselves are otherwise identical to standard Powerbeats, offering 15 hours of battery life, IPX4 sweat and water resistance, an Apple H1 chip for faster setup, pairing, and switching, Fast Fuel charging that gives one hour of playback with just five minutes of charging, and more.

As with other Powerbeats models, a short USB-A to Lightning cable is included, but the AMBUSH model also includes a unique Beats and AMBUSH co-branded ripstop pouch for storing and carrying the earphones.

Alongside the launch of AMBUSH Powerbeats, Beats is launching a new ad campaign featuring Afro-fusion artist Burna Boy and his song "Way Too Big."


AMBUSH special edition Powerbeats will be available starting tomorrow at apple.com, Dover Street Market, select Nordstrom stores, and nordstrom.com. They will be priced at $199.95, a $50 premium over the standard Powerbeats.
Tag: Beats by Dre
[ 19 comments ]

Pakaku
And this is why Beats are still marketed as Beats, instead of as Apple-branded products
Score: 3 Votes (Like | Disagree)

UltimateSyn
Just so you can be AMBUSHed at night and have your glowing PowerBeats stolen
Score: 3 Votes (Like | Disagree)

progx
Didn't see that one coming... thought Apple would be winding down the Beats line, but hey that's a cool color.
Score: 2 Votes (Like | Disagree)

GrumpyMom
It’s nice I guess when I want to listen to something at night without waking my husband and fumbling around in the dark for earbuds. But not for a $50 premium.

I admit they got my attention because they match my new green 12 mini.
Score: 2 Votes (Like | Disagree)
Read All Comments