iFixit has discovered that it is not possible to repair the iPhone 12's camera without access to Apple's proprietary, cloud-linked System Configuration app, raising questions over the repairability of the device. 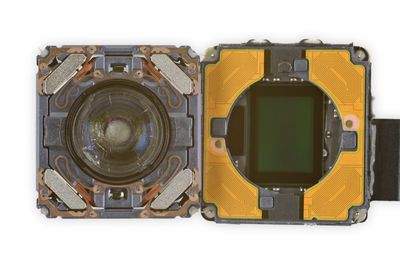 iFixit says that it conducted exhaustive testing, compared notes with multiple repair technicians, and reviewed leaked Apple training documents to reach the conclusion that the ‌iPhone 12‌'s camera "is entirely unreliable when swapped between iPhones."

The matter was first addressed by Hugh Jeffreys on YouTube:


After detecting "extremely odd results" when conducting a camera repair, iFixit found that the ‌iPhone 12‌ camera, when transferred to another ‌iPhone 12‌, appears to work on launch, but fails in actual use. It reportedly refuses to switch to the ultrawide camera, responds only to certain camera modes, and occasionally becomes completely unresponsive.

iFixit also recalled that until now, cameras have "generally been easy" to swap between iPhones of the same model. Although similar, resolvable issues occurred with the iPhone 7 and ‌iPhone‌ 8's LCD screens and Taptic Engines, iFixit believes that there is now more cause for concern.

Although it may theoretically be possible to complete camera and screen repairs without Apple's proprietary technology, iFixit is pessimistic about what the move means for independent repairs.

Apple, by design or neglect or both, is making it extremely hard to repair an iPhone without their blessing... It doesn't look good for independent repair. Apple is putting yet another question mark on a core component of the iPhone. Why? Why does a camera need to have its serial number authorized remotely by Apple just to let someone take pictures with their phone?

It is possible that Apple could address the ‌iPhone 12‌'s camera swap behavior with a future software update, but iFixit believes this is unlikely.

Taken together with the System Configuration document, and all the other bugs, tricks, and intentional lock-outs that Apple has put in the way of fully functioning iPhones, we take this as a sign that things won't get any better unless there is major change—from within, from customer demand, or from the law.

There is an argument to suggest that warning an ‌iPhone‌ owner about non-genuine parts, especially if the phone was bought used, is useful information, but iFixit notes that the camera module is not a security component.

It's a part prone to malfunction and damage, and can be harvested from otherwise-broken iPhones. Putting an authentication check on a simple camera swap poisons the iPhone repair and resale market. With no obvious benefit for iPhone buyers, it reeks of greed. Or worse: planned obsolescence.

Last week, iFixit scored the iPhone 12 a six out of ten for repairability. In response to this discovery about the camera module, iFixit is now actively reevaluating how its repairability scale scores iPhones going forward.

[AUT] Thomas
Enough... Right to Repair needs be put in law. Any arbitrary limitation to swap parts should result in ban of sale of the device.

Many might argue the camera is not a security component. I do see it as such. Yes, it's a pain. But I'd rather pay the cost to have a functional camera vs a copy-cat module half-baked.

In the end, if I bought a iPhone for the point-and-shoot, I might as well ensure the camera works as intended by the manufacturer.

Yeah, right. Bring it to Apple then, but allow the rest of us to turn 2 broken iphones into one working one...
Score: 51 Votes (Like | Disagree)

iFixIt is making a mountain out of a molehill. I have owned every model of iPhone except the iPhone 4. I have never needed to perform a repair on a single one.

My OG iPhone had a faulty touchscreen and was replaced under warranty at about 4 months old. I had a similar issue with my iPhone 6 after about 2 months. I attribute both of these issues to initial production of an entirely new device design (I always purchase on launch day). Apple’s customer service was impeccable in both situations.

Aside from these two ‘infant mortalities’ which didn’t require a repair, I have never needed to fix anything on an iPhone or even replace a battery. For the vast majority of iPhone users, repair is a hypothetical situation.

iPhones are crazy reliable devices and keep getting more reliable every year.

You're replacing your phone every year, of course you are going to find them reliable.
Score: 42 Votes (Like | Disagree)

Reason077
The noose tightens just a little bit each year, with each new iPhone.
Score: 29 Votes (Like | Disagree)

and 1989 others
As I get older I increasingly look for harware, of all kinds, that I can repair myself with a basic set of tools should they fail.
This is bad news.
Score: 28 Votes (Like | Disagree)

Mr_Brightside_@
Did no one read to the third paragraph of this article? iFixit isn't using third party camera modules, they literally swapped modules between two iPhone 12s.
Score: 25 Votes (Like | Disagree)

aaadktda
There was another guy on youtube that discovered this before them. Maybe it would be nice to give him credit for it.

Thursday July 30, 2020 10:13 am PDT by Juli Clover
Apple CEO Tim Cook yesterday testified in front of the U.S. House Judiciary Antitrust Subcommittee where he was questioned on Apple's App Store policies, but Congress also released a series of emails that Apple had submitted as part of the ongoing antitrust investigation. Image via iFixit Those emails revealed Apple's thoughts on App Store fees and provided insight into its efforts to negotiat...
Read Full Article • 118 comments

Thursday June 3, 2021 1:09 pm PDT by Juli Clover
Apple now considers the 27-inch Thunderbolt Display to be a "vintage" product because it has been close to five years since it was last offered for sale. The Thunderbolt Display was today added to Apple's list of vintage and obsolete products, which are part of a support document on obtaining service for an Apple product after a warranty expires. Products are considered vintage when it’s...
Read Full Article • 161 comments

Thursday January 14, 2021 8:07 am PST by Joe Rossignol and Steve Moser
In the second beta of iOS 14.4 seeded to developers and public testers this week, MacRumors contributor Steve Moser has discovered code indicating that Apple will be introducing a new warning on iPhones that have had their camera repaired or replaced with aftermarket components rather than genuine Apple components. "Unable to verify this iPhone has a genuine Apple camera," the message will...
Read Full Article • 77 comments

Monday May 24, 2021 1:13 pm PDT by Juli Clover
Apple last Friday released the first M1 iMac models to customers and began selling them in stores, and iFixit has now started one of its traditional teardowns on the new machines. iFixit is tearing down the mid-tier purple iMac model with an 8-core CPU, an 8-core GPU, and 8GB RAM. It's worth noting that the internals of this model will look different than the internals of the base model with ...
Read Full Article • 92 comments