Apple has shipped 10.6 percent fewer iPhones year-on-year in the third quarter of 2020, meaning that it has been overtaken by Xiaomi for the first time, according to new data shared by IDC. 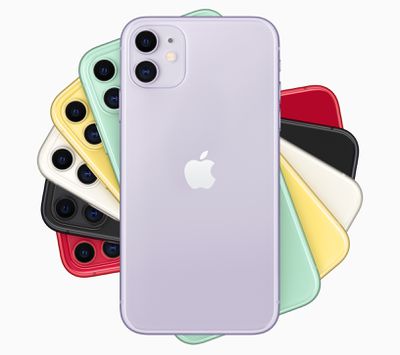 The report details how Apple is now ranked as the fourth-largest smartphone manufacturer by market share. This is the first time that Apple has ranked fourth, with Xiaomi, Huawei, and Samsung exceeding Apple's 11.8 percent share.

In total, Apple is believed to have shipped 41.2 million devices in the third quarter, which is five million less than the same time last year.

The drop was expected on the back of the delay in launching the iPhone 12 lineup, which usually appears in the third quarter. Irrespective of the belated arrival of the ‌iPhone 12‌, the iPhone 11 and iPhone SE contributed to the majority of Apple's volume and performed "exceptionally well."

Going forwards, IDC expects Apple to grow in coming quarters due to strong early demand for the ‌iPhone 12‌ and solid trade-in offers from major carriers, particularly within the United States.

Xiaomi overtook Apple for the first time with a market share of 13.1 percent, achieving a 42 percent growth. The rise is supposedly due to strong gains in India and China.

Overall, the global smartphone market declined by only 1.3 percent year-on-year in the third quarter of 2020. The results were stronger than IDC's previous forecast of a nine percent year-over-year decline. An important trend was the strength of shipments in India, which is the second-largest market globally, and other emerging markets, such as Brazil, Indonesia, and Russia.

LeeW
The world is changing (has changed) and will continue changing. The effects of COVID will be long felt. Whilst there will still be a good demand for iPhones, the demand for cheaper handsets will always be stronger.
Score: 17 Votes (Like | Disagree)

Dwalls90
Investors want to see profitability and margin, not volume, and that is where Apple still holds a large lead.

China is the latest and largest market for consumer goods, so it makes sense that a company that has focused on the Chinese market from day 1 would see this level of growth, with their product line having a lower margin but being more affordable.

EDIT: For anyone curious, you can Google it yourself (if you want additional sources), but one article discussing Apple vs. competitor profits in the smartphone arena:

They deserve it. The long delays in shipping multiple Apple products are inadmissible. And this is not due to the pandemic, this happens every single year to a greater or lesser extent. Not professional at all and unexpected coming from one of the biggest and richest companies in the world. Shame on Apple!

What are you even talking about? In case you missed the earnings call, Apple is doing exceptionally well, particularly given the pandemic environment the economy is operating in. The pandemic shook up the world and economy in many ways, and the fact Apple was still able to deliver products consistent with dates from prior years (without a pandemic existing) is a testament to their success.
Score: 15 Votes (Like | Disagree)

Investors want to see profitability and margin, not volume, and that is where Apple still holds a large lead.

Volume is important though, the change in direction by Tim to focus on services requires volume to grow profitability and margin. That is why you are seeing the Homepod Mini, cheaper than before handset options and so on, if he cant' drive up the volume it won't work.
Score: 11 Votes (Like | Disagree)

apparatchik
If Apple wasnt the largest public traded company this would be a throwback to the early 2thousands, before the iPhone, etc when Apple was considered a cool underdog with expensive but different computers.

Bring on the AS macs already Apple, could you? :)
Score: 8 Votes (Like | Disagree)

GermanSuplex
Apple is not sweating this at all. Their ecosystem is tight and their profits huge. It’s fun for bragging rights, but dollars and profit margins are where the real story is.

You also don’t want saturation, because you will have nowhere to go but down. If lots of people are buying phones other than Apples, but Apple is still having high profits, it means there’s still tons of room for growth.
Score: 8 Votes (Like | Disagree)
Read All Comments

Sunday September 25, 2022 6:50 am PDT by Sami Fathi
Apple could decide to release its remaining products for 2022, which includes an updated iPad Pro, Mac mini, and 14-inch and 16-inch MacBook Pros, through a press release on its website rather than a digital event, according to Bloomberg's Mark Gurman. In his latest Power On newsletter, Gurman said that Apple is currently "likely to release its remaining 2022 products via press releases,...
Read Full Article • 132 comments