Apple has a content deal with WildBrain, the company behind the popular "Peanuts" franchise. The deal includes original content like "The Snoopy Show," and, as announced earlier this month, Peanuts specials for Christmas, Thanksgiving, Halloween, Mother's Day, Earth Day, New Year's Eve, and more. 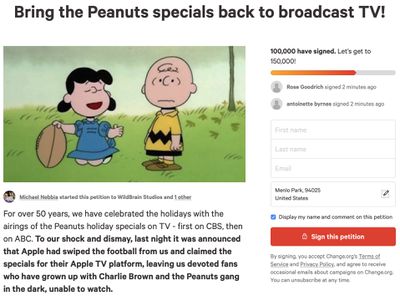 Longtime Peanuts fans are unhappy with the news that Peanuts specials are going to be limited to Apple TV+, and have created a petition urging WildBrain to bring the content back to broadcast TV.

For over 50 years, we have celebrated the holidays with the airings of the Peanuts holiday specials on TV - first on CBS, then on ABC. To our shock and dismay, last night it was announced that Apple had swiped the football from us and claimed the specials for their Apple TV platform, leaving us devoted fans who have grown up with Charlie Brown and the Peanuts gang in the dark, unable to watch.

The petition urges Peanuts fans to "stand up to Apple and WildBrain" with the aim of getting Peanuts back on television. At the time of writing, it has gathered more than 100,000 signatures, though it's not clear if the petition will be successful.

Apple and WildBrain likely anticipated Peanuts fans being unhappy with the ‌Apple TV+‌ exclusivity. The Halloween special, "It's the Great Pumpkin, Charlie Brown," premiered on ‌Apple TV+‌ on October 19 for ‌Apple TV+‌ subscribers, but Apple is also making it free to watch from October 30 through November 1.

Though the classic specials will be available for free in the Apple TV app, watching them still requires having access to the app in the first place on an iOS device, Mac, ‌Apple TV‌, or other compatible device.

LeadingHeat
Oh my gosh. People, stop whining. It’s being offered for free, it’s not even paywalled behind Apple TV+.
Score: 41 Votes (Like | Disagree)

SW3029
Just subscribe to Apple TV Plus. It's 5 bucks. Or watch it for free on Halloween weekend, you know, when Apple is letting everyone watch it for free.
Score: 19 Votes (Like | Disagree)

How would anyone without an Apple TV watch it, free or paid?

tekriter
Someone asked in an earlier reply - who could possibly be a longtime Peanuts fan? Me, for one.

A Charlie Brown Christmas first aired when I was ten years old. I had been an avid reader of Peanuts for a couple of years. I still remember how excited I and my friends were - Charlie Brown was going to be on TV! It was maybe six or seven years later that I actually saw it in color.

I try to never miss seeing it again and again; I’m sure that in some years along the way I may have forgotten to watch, or to set it to record. I’m 65 now. I’ve watched it with my kids, and with their kids too. And somewhere in the house I know we have it on DVD, but I don’t think it’s been opened.

Streaming it, or watching the DVD just isn’t the same. I guess you have to be of a certain age to remember the feeling of anticipation. The feeling that it’s only two more days until something would be on! Rudolph, Frosty, A Christmas Carol, The Wizard of Oz - all appointment tv before the Age of VCRs. Dinner’s over, and it’s almost seven o’clock!

I’m sure I’ll watch it again this year, but something‘s been lost along the way.

And for the person who suggested just pirating it - you really need to see it. There’s a message in it that you need.
Score: 16 Votes (Like | Disagree)

But I am going to miss all those commercials that you used to get with broadcast tv... that's the real authentic feel.. wah wah wahhhhhh. /s
Score: 14 Votes (Like | Disagree)

How would anyone without an Apple TV watch it, free or paid?