Apple is still including EarPods in the box of every iPhone in France due to legal obligations. 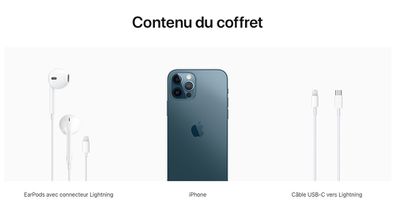 According to Apple's regional French online store, every ‌iPhone‌ including the iPhone 12 comes with both a USB-C to Lightning cable and EarPods with a Lightning connector.

The inclusion of earphones is likely due to legislation in France that requires all smartphones to include a "handsfree kit" to protect children under 14 from the potential risk of electromagnetic radio waves. The obligation is based on the precautionary principle, because the risks of exposing developing brains to electromagnetic waves are not clearly known, according to French law:

At the request of the purchaser of a mobile phone, the operator must provide an accessory such as a hands-free kit or headset suitable for children under 14 years of age.

Promoting the use of a mobile phone without a handsfree accessory in France is punishable by a criminal fine of 75,000 euros.

As was rumored before Apple officially unveiled the ‌iPhone 12‌, all four models ship without EarPods or a power adapter in the box in other countries around the world. In addition, the ‌iPhone‌ 11, ‌iPhone‌ XR, and iPhone SE no longer include these accessories either.

Apple's website encourages customers to use their existing Apple power adapter and headphones or buy these accessories separately, and to help offset the cost, Apple has now lowered the price of its EarPods with a Lightning connector from $29 to $19. Apple's new 20W power adapter for iPhones also retails for $19, down from $29 for its now-discontinued 18W power adapter that was included with the ‌iPhone‌ 11 lineup until now.

Apple touted the environmental benefits of no longer including EarPods or a power adapter with iPhones, noting that the move reduces carbon emissions and avoids the mining and use of rare-earth elements. ‌iPhone 12‌ models also ship in a thinner box as a result, with Apple claiming that it can fit 70 percent more ‌iPhone‌ boxes on a single pallet during shipping.

Kobayagi
People believing and actually defending Apple that environment is the reason they don't include these basic accessories in the box is just laughable. They're the customer Apple dreams of, that perfect sheep that never criticizes any of their moves and just swallows and buys everything.

Now, if I want a charger or earpods, they will have their own separate box, which might also need to be shipped if I don't buy them in the store. Which might very well be the case during these corona times. All of this means more used boxing materials and more shipping emissions etc., which obviously has an impact on the environment.

Let's not kid ourselves and just admit Apple just wants to squeeze that last penny out of their customers. If they really, really cared, then the iPhone would cheaper by the exact amount the charger and earpods cost, so the customer could still get those but not suddenly have to pay more. And this still causes that unneeded hit on the environment (if they care so much...).
Score: 39 Votes (Like | Disagree)

Hey Timmy, how much bigger is the packaging in France with Earpods in the Box and how much is that in cars on the roads

How many are on the road does Apple gluing consumables (batteries) into MacBook Pros and Airs, meaning the whole top case has to be replaced?
Score: 19 Votes (Like | Disagree)

Marzel
It's honestly unacceptable that Apple is playing the "environmentally friendly" card for not including the EarPods or a charger while keeping the prices the same. I'm totally fine with the move overall, but it doesn't explain why these items just magically disappear from older models, or their direct upgrades, without price being affected.
Score: 17 Votes (Like | Disagree)

matt_and_187_like_this
Hey Timmy, how much bigger is the packaging in France with Earpods in the Box and how much is that in cars on the roads
Score: 11 Votes (Like | Disagree)

So has apple actually said they are doing this for environmental reasons? Or just some rumor/speculation from apple fans trying to justify the purchase?

Did you not watch the event? They literally said it reduces carbon emissions (among many other reasons).
Score: 9 Votes (Like | Disagree)
Read All Comments