Accessory maker Arlo today introduced the Pro 4, a new version of its security camera that connects directly to Wi-Fi for easier setup as a standalone security solution, eliminating the need for a separate base station. 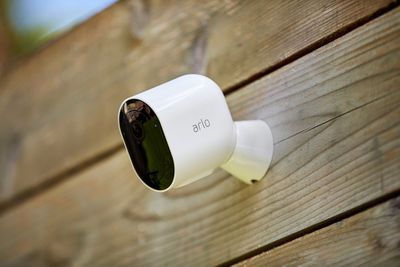 Like its Pro 3 predecessor, the Pro 4 features 2K video resolution with HDR, a 160-degree viewing angle, an integrated spotlight and siren, color night vision, two-way audio, and a wire-free, weather-resistant design. A removable, rechargeable battery continues to provide up to six months of battery life per charge.

Unfortunately, the Pro 4 is not compatible with HomeKit at launch, according to the Arlo website. The Pro 3 gained HomeKit support five months after it launched, so it is possible that the Pro 4 will receive HomeKit in a future software update. We've reached out to Arlo for comment on their HomeKit plans and we'll update this story if we hear back.

Arlo also introduced the Ultra 2, a new HomeKit-enabled security camera with improved range and connectivity compared to the original Ultra, expanding placement options beyond traditional cameras that require an outlet.

The Pro 4 is available for pre-order at Arlo.com and Best Buy starting today for $199.99, while Ultra 2 one- and two-camera kits start at $299.99 and are available for pre-order at Arlo.com, Best Buy, and Amazon. Each camera comes with a complimentary three-month Arlo Smart trial, providing extended 30-day rolling cloud storage for video recordings.

Update: Arlo informed MacRumors that it is "working to have Apple HomeKit available on products," but it has no updates to share regarding the Pro 4 at this time.

macsplusmacs
I went 4K arlo this past january.

The worst consumer electronics experience in quite a while. So slow to start. so many base station issues.

I have great internet and great routers.

I gave up on them and went Eufy Pro 2 cams.

A dream compared to Arlo.

eliaz
You won’t hear back from Arlo for at least a few months, if that. Their attention to the customer and issues is horrible... I bought a 4 pack of Arlo Ultras and it’s just been one issue after another. I’m slowly going to phase them out for something by Eufy or any other company.
Score: 6 Votes (Like | Disagree)

connects directly to Wi-Fi for easier setup as a standalone security solution, eliminating the need for a separate base station.

I went 4K arlo this past january.
The worst consumer electronics experience in quite a while. So slow to start. so many base station issues.
I have great internet and great routers.
I gave up on them and went Eufy Pro 2 cams.
A dream compared to Arlo.

This is the thing that Netgear doesn't make particularly clear with the Arlo system that users NEED to know: most of the Arlo systems use their own Wi-Fi network, even if you don't want that. I have clients who have spend big $$ on Ubiquiti and mesh Wi-Fi networks who decide they want to use Arlo cams (their end-user advertising obviously works!), and I was aghast to find the first time I unboxed them that they wouldn't use the well-built-out UniFi network that I had just so painstakingly built out. Instead, you're supposed to patch-quilt base stations all over the place and create interference for your main Wi-Fi network. It's absurd. (Even if you have Netgear networking hardware, like Orbi!)

I'm glad to hear that Netgear has finally backtracked on that. But I'd not recommend Arlo gear. I can't speak to Eufy, though I like Anker hardware in general; I just also don't generally trust sending data to other companies' clouds, esp if they operate outside the US. (No, not "xenophobia", "law and order" and the "reach of the 'long arm of the law'".) Security cams are a wasteland of garbage in general (starting with Hikvision and Dahua), and IMHO Arlo hasn't added much. None of the other vendors—including Amazon/Nest/Ring/Blink and Ubiquiti Protect—impress me much though either. AFAIC, nobody has it "right" yet.

fujitasenpai
My Arlo Pro 2 cameras were one of the worst purchase I've made. So many issues with them. Same with [USER=354405]@eliaz[/USER] I'm in the process of phasing them out as well.
Score: 4 Votes (Like | Disagree)

joecomo
Their only interest seems to be in selling their subscription services - going forward I will look into Anker Eufy
Score: 4 Votes (Like | Disagree)
Read All Comments

Friday April 30, 2021 5:50 am PDT by Mitchel Broussard
Apple today opened pre-orders for a new wave of products, including the new Apple TV 4K, 11-inch and 12.9-inch iPad Pro, and 24-inch M1 iMac. You can buy all of these products from Apple.com, but if you prefer to shop at third-party Apple resellers, we've put together a list of places selling all of the new products in this article. Note: MacRumors is an affiliate partner with these vendors....
Read Full Article • 18 comments

Friday May 28, 2021 6:24 am PDT by Mitchel Broussard
Today we're tracking the first Amazon discount on Apple's 2021 M1 11-inch iPad Pro. Specifically, you can get the 128GB Wi-Fi model for $749.00, down from $799.00. The tablet is available to ship in one to two business days, and it's only available in Space Gray at this price. Note: MacRumors is an affiliate partner with Amazon. When you click a link and make a purchase, we may receive a small ...
Read Full Article • 37 comments

Friday November 20, 2020 10:19 am PST by Juli Clover
Apple retail locations and Apple's online store now offer Anker's eufyCam 2 Pro, a home security camera that supports Apple's HomeKit Secure Video feature. Priced at $349.95, the eufyCam 2 Pro features a 2K resolution and a 140 degree field of view for sharp wide-angle video. The setup comes with a home base required for operation along with two cameras to use in the home. With HomeKit...
Read Full Article • 55 comments

Wednesday May 5, 2021 6:53 am PDT by Mitchel Broussard
Deals on the previous generation 2020 iPad Pro models continue to appear in the wake of the latest 2021 tablets, and today Amazon is offering even steeper price cuts on a few models. Below you can find the full list of 2020 iPad Pro discounts, and we're highlighting a few particularly notable sales. Note: MacRumors is an affiliate partner with these vendors. When you click a link and make a...
Read Full Article • 4 comments

Thursday December 3, 2020 3:44 am PST by Tim Hardwick
Ecobee has updated its SmartCamera to support Apple's HomeKit Secure Video, which allows the cameras to capture and store recordings securely in iCloud. The firmware update means SmartCamera owners have another option aside from Ecobee's $5-a-month subscription for video recording and movement notifications. With ‌HomeKit Secure Video‌, video footage is encrypted and stored in iCloud...
Read Full Article • 13 comments