Apple has officially retired Beats Updater, the software utility that lets users update the firmware of their Beats Wireless headphones, earphones, and speakers. 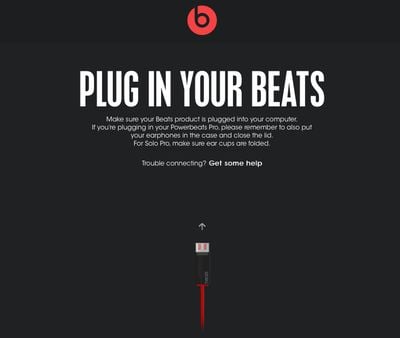 Beats Updater allows users to plug their Beats product directly into the USB port of their computer to check for firmware updates online, but with Apple's growing tendency to deliver over-the-air updates to wireless products via iOS and iPadOS, the company clearly feels the utility has reached the end of its life.

Beats Updater is still available to download for use with the following products, but Apple says no new versions will be available in future.

If you have one of the Beats headphones or earphones listed below, pairing them with your iPhone, iPad, or iPod touch will update them automatically. If you have an Android device, download the Beats app for Android from the Google Play store to update your firmware.

Apple getting rid of something that just works...
What a surprise!!!

I must have missed the part of the article where it states that wireless updates usually don't work.

Just like getting rid of iTunes 12.6.5.3.
So, we have to download the same thing over and over if we have multiple products.
This is the way Apple considers "for the environment".

Great. So now you plug them in and wait for them to update when they feel like it like the AirPods? STUPID

-DMN-
Apple getting rid of something that just works...
What a surprise!!!
Score: 3 Votes (Like | Disagree)

Apparently you haven’t been one of many here where this just doesn’t work that way. There are entire threads dedicated to it.

Correct. It always just works for all the AirPods and AirPods Pro in this house. But, then, we aren’t obsessed forum members who demand the update immediately and aren’t willing to wait a day until it updates.
Score: 3 Votes (Like | Disagree)

jbachandouris
Great. So now you plug them in and wait for them to update when they feel like it like the AirPods? STUPID
Score: 3 Votes (Like | Disagree)

No. They update when paired and not in use. Just like AirPods.

Apparently you haven’t been one of many here where this just doesn’t work that way. There are entire threads dedicated to it.
Score: 2 Votes (Like | Disagree)
Read All Comments

Monday November 1, 2021 12:38 pm PDT by Juli Clover
Apple is offering discounts on several of its Beats headphones options in the United States, dropping prices from $20 to $50 depending on the product. The Beats Flex, Apple's most affordable Beats headphones, are available for $50 at the current time, a discount of $20 off of the regular $70 price. Beats Flex are earbuds with a wire between them, and they come in blue, black, yellow, and...
Read Full Article • 23 comments

Wednesday March 2, 2022 6:39 am PST by Joe Rossignol
While the Beats Pill+ was discontinued a few months ago, the portable Bluetooth speaker is making a comeback with a new limited-edition model. Beats has collaborated with fashion brand Stüssy on a limited-edition Beats Pill+ speaker featuring a skull-and-bones design and the Stüssy logo. An engraved message on the top of the speaker says "the only good system is a sound system." The...
Read Full Article • 34 comments

Tuesday September 21, 2021 2:33 am PDT by Sami Fathi
Apple today launched a new offer that provides owners of the second-generation AirPods, AirPods Pro, AirPods Max, and select Beats products with a six-month free subscription to Apple Music. The offer is only valid for new Apple Music subscribers, and no new purchase is required, so this is open to any users who currently own an eligible product. Eligible products include the...
Read Full Article • 26 comments

Monday November 1, 2021 3:24 pm PDT by Juli Clover
Following the launch of the Beats Fit Pro this morning, Apple has discontinued several older Beats headphones options, including the $150 Powerbeats, the $250 Beats Solo Pro, and the $130 Beats EP on-ear headphones. These Beats headphone options were listed on Apple's online store as of yesterday, but today, attempting to visit one of the links for the products brings up a warning that the...
Read Full Article • 54 comments