Apple's new Series 6 and SE models can be purchased with new Solo Loop or Braided Solo Loop band options that have no clasp or fastener, instead using stretch to fit over the hand. As there is no on-band sizing mechanism, the Solo and Braided Solo Loops come in nine sizes, leading to fit issues. 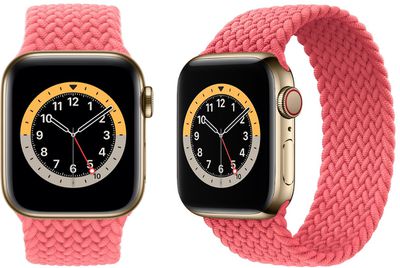 As we reported on Monday, customers who ordered and received a new Apple Watch with a Solo Loop or a Braided Solo Loop and then found that the band did not fit properly were told by Apple's staff that the only online return option involved returning the entire watch.

Following customer complaints and the attention the issue received, MacRumors can confirm that Apple has changed its policy and is now allowing bands to be swapped out online without the need to return the entire watch.

We were able to initiate an online band swap without needing to return the Apple Watch this morning, something that we were not able to do yesterday, suggesting the policy change happened today. Customers are able to send back the poorly-fitting band and will receive a new one when the old one is received.

GameClub exec Eli Hodapp, who first raised the return issue, was also able to initiate a return of his Braided Solo Loop without having to return his entire watch, and he was also provided with a free Sport Band for his trouble.

Currently on the phone with Apple Support. They're swapping out my band and prioritizing replacements so they will ship way faster than the store shows. They're even letting me order a third band to try and return, just keeping whatever size between between 6, 7, and 8 fits best. — Eli Hodapp (@hodapp) September 24, 2020

They're also throwing in a free Sport Band, and profusely apologizing. The agent kept saying, "We messed up, it's on us," and said if I don't get a return label just keep the original braided band that came with my watch-What a complete turnaround compared to the response Monday. — Eli Hodapp (@hodapp) September 24, 2020

We have seen other anecdotal reports of similar situations on Twitter, where Apple has allowed customers to return their bands online without having to return the entire watch and wait for a replacement, which is a much improved solution as the wait for a new Apple Watch online is weeks at this point.

From the launch of the Apple Watch Series 6, Apple has been able to do in-store band swaps for those who got an ill-fitting band after getting the wrong result with Apple's measurement tool, but not everyone lives near a store and not all stores are open at this time.

In-store returns can be somewhat confusing for employees and the process can take some time as the swap is worked out, but MacRumors has initiated two separate in-store band exchanges with success.

For those who need to do an online band swap and want to be able to send the band back without returning the entire watch, a phone call is needed. The online support staff is not able to initiate this return process and it must be done over the phone.

Online support should know about the new process and will direct users to call, but if you're having trouble with the online chat, try an over the phone support solution.

Rogifan
Sigh. Had all of Apple done this from the beginning this wouldn’t even be a story.
Score: 15 Votes (Like | Disagree)

Hodapp
Love eating all this claim chowder from people in the original thread who were trying to blame me for getting the wrong band when the Apple support agent repeatedly reiterated that the nylon loops ran big and I did order the right size based on my measurements using the paper tool. Nom nom nom.
Score: 12 Votes (Like | Disagree)

Sigh. Had all of Apple done this from the beginning this wouldn’t even be a story.

Now wait for the wave of people complaining that they only get the replacement band they’re entitled to and not the extra freebies the original poster mentioned.
Score: 11 Votes (Like | Disagree)