This week's addition to Apple Arcade is World's End Club, described as a new type of action-adventure game that fuses a thrilling story with 2D side-scrolling action. The game is available on the iPhone, iPad, Mac, and Apple TV. 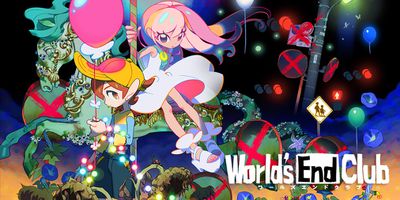 World's End Club revolves around a group of "oddball kids" from Japan who get into an accident while on a bus for a class trip. When they wake up, they find they are trapped in an abandoned theme park under the sea. Suddenly, a mysterious clown appears and orders the kids to play a "Fate Game," forcing them to fight for their lives.

Watch the trailer below:

Apple Arcade has also started advertising three more titles that are coming soon to the iPhone, iPad, Mac, and Apple TV, including the sword-swinging fantasies Slash Quest! and Marble Knights as well as puzzle game A Monster's Expedition.

Apple Arcade is a subscription-based service that provides iPhone, iPad, Apple TV, and Mac users with access to over 100 premium games with no in-app purchases or ads for $4.99 per month. The games can be downloaded from the Arcade tab of the App Store.

icanhazmac
All your base are belong to us!
Score: 5 Votes (Like | Disagree)

Enough with the 2D scrollers from 10 years ago, bring us some more RPG's, or better yet an FPS o_O

The irony of complaining about “2D scrollers from 10 years ago” then asking for RPG games that have been around in one form or another since the early 20th century...

Vanilla35
Enough with the 2D scrollers from 10 years ago, bring us some more RPG's, or better yet an FPS o_O
Score: 2 Votes (Like | Disagree)

duervo
I recently canceled my Apple Arcade sub. This does nothing to make me want to reactivate it.
Score: 2 Votes (Like | Disagree)

The only game worth playing was Grindstone. I'm so glad it's coming to Nintendo Switch soon. Apple made the huge mistake of not allowing people to buy Apple Arcade games a la carte. Apple continues to be clueless about gaming.

I see it differently. When I saw Grindstone was being released for the Nintendo Switch, I saw a indie studio that was able to receive funding to focus on and release a game to broad acclaim (that might not have seen a release otherwise), tweak and improve it over the past year and then release it on the Switch. Where, now, if someone asks me “What’s a good game for the Switch?” I’ll tell them Grindstone, driving even more money to that indie developer.

If there was only ONE company that was able parlay a Apple Arcade release to a Switch release, I’d say good on them. But, I saw a few games just announced for the Switch that are following their Apple Arcade release and I’m happy for all of them. And, even better if the money they’re getting from Apple Arcade is enough to provide funding for other Non-Apple Arcade efforts (like Capybara Games’ Below, for Xbox, Steam, and PS4).
Score: 1 Votes (Like | Disagree)
Read All Comments