Apple today seeded the second beta of the upcoming macOS 11 Big Sur update to its public beta testing group, allowing non-developers to give the software a try ahead of its public release this fall. The second beta comes two weeks after the first beta. 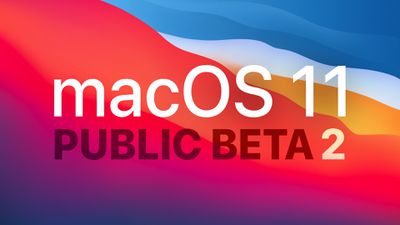 Question: Is macOS Server being discontinued in macOS 11?

Somebody please check the column view in Finder. Has Apple finally fixed “Right Size All Columns Individually” option, so that columns automatically resize depending on the width of the folder/file name when browsing through various folders?

Right now all this right click feature does is adjusting the width of only one column ones and than that width remain the same for all other columns even if nested folder has very short file names in it.

Browsing files in column view in Finder has been a disaster for years now. ForkLift mostly does the job but at some things it is not good enough to be a full Finder replacement. It is simply time for Apple to fix this completely broken feature.

I have been reporting this throughout the whole beta test period of Mojave and I think once or twice during Catalina. The only hope for this to be addressed is to make some of the big youtubers / tech sites mentioning it and hopefully the right person from Apple sees this.

This issue has been since day one when I started using Macs in 2013 and basically covers:

Sometimes I wonder if anyone at Apple actually does the job on their Macs, you know - like working with tons of files. ?‍♂️

I tried this on numerous files with 4 columns each, with at least 3 truncated file columns in each and the “Right Size All Columns Individually” (secondary/"right" click on any vertical border) worked perfectly; allowing no less or no more space that was needed for each column with no truncated titles. I tried with both font size 13 and 14.
Score: 5 Votes (Like | Disagree)

I like Big Sur. I believe that it is shaping up to be an excellent release.

If some of you could do the same, I would appreciate it.

At least be specific about what you hate
Score: 4 Votes (Like | Disagree)

thadoggfather
awesome - I could be wrong, but the feedback for beta 5 so far .. in the one day of exposure.. has been that its rather regressive bug wise and such from beta 4 / PB1.

(want to be careful from one beta to the next as a general practice but)
Score: 4 Votes (Like | Disagree)
Read All Comments