Compelling a suspect to unlock a smartphone doesn't violate Fifth Amendment rights, New Jersey's Supreme Court ruled today (via NorthJersey.com), adding a new argument to the ongoing debate on whether those arrested can be forced to unlock their devices with biometrics or passcodes. 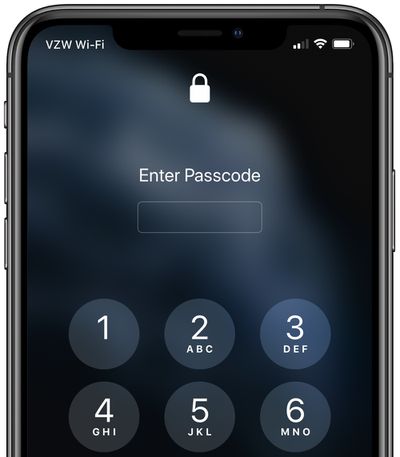 Courts around the United States have been split on the issue, with some determining that suspects cannot be forced to unlock an iPhone, while others have said it's not a rights violation. Most of these arguments have focused on biometric smartphone unlocking methods like Touch ID and Face ID, but New Jersey says that a criminal defendant can be forced to provide a passcode.

In the NJ case, prosecutors wanted access to two iPhones owned by former Essex County sheriff Robert Andrews, accused of secretly working with a street gang. Andrews argued that requiring him to provide a passcode would be a violation of his Fifth Amendment rights against self-incrimination, but the court rejected the argument and said that it only applies when the accused is "compelled to make a testimonial communication that is incriminating."

Fifth Amendment rights do not protect suspects from producing documents to use as evidence in cases, and the court considered the ‌iPhone‌'s text and phone call content to be documents.

The court, which was split on the decision 4 to 3, said that even if the passcodes were considered testimony, there was already evidence that there were texts and telephone exchanges between the sheriff and an alleged drug dealer, enacting a "foregone conclusion exception" to the Fifth Amendment because the state already knows about the texts. By providing the passcodes, Andrews would not be providing information the government is not already aware of. The full ruling with additional context is available from the NJ courts website [PDF].

Based on the record in this case, compelled production of the passcodes falls within the foregone conclusion exception. The State's demonstration of the passcodes' existence, Andrews's previous possession and operation of the cellphones, and the passcodes' self-authenticating nature render the issue here one of surrender, not testimony, and the exception thus applies. Therefore, the Fifth Amendment does not protect Andrews from compelled disclosure of the passcodes to his cellphones. The Court would reach the same conclusion if it viewed the analysis to encompass the phones' contents. The search warrants and record evidence of the particular content that the State knew the phones contained provide ample support for that determination.

"Forget alleged criminal conduct: It's time to rethink whether you should keep anything simply private or personal on a personal electronic device because if the government wants it, they can now get it," he said. "If you are in a car accident they can go through your whole phone to see if you were a distracted driver."

The New Jersey Supreme Court ruling could have an impact on future court cases involving locked smartphones, and courts will continue to come to different conclusions on the issue of smartphone unlocking until the United States Supreme Court steps in and clarifies how constitutional rights and precedents apply to new technologies.

Not a chance. How exactly are they going to enforce that? Forcing them to provide biological data is one thing, but forcing them to speak something they've remembered? You can't force someone to talk, period.

cmwade77
Simple solution, Apple and Google need to build in a mechanism where if you enter a certain password/passcode, it immediately erases the phone using a completely secure erase mechanism.
Score: 42 Votes (Like | Disagree)

GermanSuplex
Not a chance. How exactly are they going to enforce that? Forcing them to provide biological data is one thing, but forcing them to speak something they've remembered? You can't force someone to talk, period.
Score: 37 Votes (Like | Disagree)

aardwolf
How do you compel someone? Are you going to waterboard us until we tell you the passcode?
Score: 27 Votes (Like | Disagree)

Rocko99991
"By providing the passcodes, Andrews would not be providing information the government is not already aware of." Then you don't need my passcode bub.
Score: 21 Votes (Like | Disagree)

macsrcool1234
idiot NJ at it once again.

Not a chance. How exactly are they going to enforce that? Forcing them to provide biological data is one thing, but forcing them to speak something they've remembered? You can't force someone to talk, period.

they'll throw you in for contempt until you do
Score: 19 Votes (Like | Disagree)
Read All Comments

Friday June 24, 2022 5:08 am PDT by Joe Rossignol
Apple today launched its annual "Back to School" promotion for college/university students in the United States and Canada. This year's promotion offers a free Apple gift card with the purchase of an eligible Mac or iPad, rather than free AirPods like last year. Apple is also offering students 20% off AppleCare+ plans during the promotion. Apple is offering a $150 gift card with the purchase ...
Read Full Article • 118 comments

Friday June 24, 2022 2:52 am PDT by Hartley Charlton
Apple is "likely" to announce its long-rumored mixed-reality headset as soon as January 2023, Apple analyst Ming-Chi Kuo has reiterated. Concept render based on purported leaked information by Ian Zelbo In a detailed post on Medium, Kuo explained that Apple's headset will be a "game-changer" for the augmented-reality and virtual-reality market. Describing some of the headset's...
Read Full Article • 97 comments