Disney's streaming television and movie service Disney+ boasts 57.5 million paid subscribers worldwide as of June 27, up three million from the 54.5 million subscribers it had in May 2020. 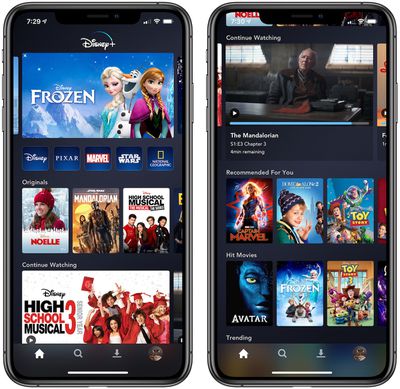 By early 2020, Disney+ had already hit 50 million subscribers, marking impressive growth since it launched in November. When Disney+ launched, Disney estimated that it would see 60 to 90 million subscribers worldwide by the end of 2024, but the company is already well on its way to hitting the lower end of that target in 2020.

Disney+ launched right around the same time that Apple introduced Apple TV+, but because Apple does not provide subscriber numbers for the service, there's no direct comparison to make.

Apple has been offering a free year of ‌Apple TV+‌ service to those who purchase a new Apple device and has been doing so since late 2019, so it will still be some time before those free accounts convert into paid subscriptions.

Disney+ has an edge over ‌Apple TV+‌ because Disney has an established catalog of content along with popular Star Wars and Marvel content. ‌Apple TV+‌ has been working to build up new content offerings and has added many TV shows and movies, but it still trails Disney in terms of sheer content.

Most recently, Apple picked up Tom Hanks WWII movie "Greyhound," which reportedly saw large numbers of people watching. The movie allegedly had the largest opening weekend release ever on ‌Apple TV+‌, with a viewing audience commensurate with a summer box office hit.

Across all of its services, including Disney+, Hulu, and ESPN, Disney said that it has more than 100 million paying subscribers worldwide. Disney today also said that it plans to bring Mulan to Disney+ on September 4, but it will cost an additional $29.99.

Haven't even opened the app since The Mandalorian finished.

Apple Knowledge Navigator
Well deserved. They waited their turn, reviewed what everyone else was doing and improved in just about every way. It’s honestly fantastic value even as a single user, and for families I can imagine it’s a steal.
Score: 15 Votes (Like | Disagree)

friedmud
Just echoing others here. Easily the best streaming service I subscribe to. One of the things they did right? Quality. The quality of the video stream is TOP notch. Most of the movies are in 4k, HDR, and the BIG kicker: all of the main Disney movies have Dolby Atmos soundtracks. For that alone, they would get my dollar... but as others have mentioned the value goes well beyond even the quality.
Score: 13 Votes (Like | Disagree)

jetjaguar
Haven't even opened the app since The Mandalorian finished.
Score: 13 Votes (Like | Disagree)

Apple_Robert
I bought the 3 year package when it was on sale for pre-launch. I have really been enjoying the selection. Nice to have family rated shows to watch.
Score: 11 Votes (Like | Disagree)
Read All Comments