'The Lullaby of Life' Comes to Apple Arcade

This week's addition to the Apple Arcade subscription gaming service is "The Lullaby of Life," a new title from developer 1 Simple Game that explores the origins of life through a relaxing, immersive, sonic experience. 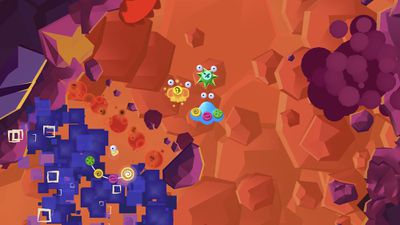 In The Lullaby of Life you are the catalyst for change in a universe currently inert but filled with potential.

Explore this amazing world that combines relaxation, dexterity and agility, and help it reach its maximum splendor using the power of music to make life bloom.

This adventure has no textual elements, and wearing headphones is highly recommended. Let’s write together a new story about the origin of life!

We're celebrating that we can finally share our newest launch 🥳🤩. The Lullaby of Life 🎵🎧! The excellent calm and immersive atmosphere is ideal for relaxing. Available only on #AppleArcade! 👉 https://t.co/YDAvPPUBZx pic.twitter.com/TmgPumKdw1 — 1 Simple Game (@1SimpleGame) July 24, 2020

"The Lullaby of Life" is available to ‌Apple Arcade‌ subscribers on the App Store for iPhone, iPad, and Apple TV, as well as in the Mac App Store. ‌Apple Arcade‌ provides ‌iPhone‌, ‌iPad‌, ‌Apple TV‌, and Mac users with access to over 100 games with no in-app purchases or ads for $4.99 per month after a free one-month trial.
Tag: Apple Arcade Guide
[ 22 comments ]

dapa0s
Great, just one more game I will never play. I love Apple, but they were just never good with gaming.
Score: 11 Votes (Like | Disagree)

madmin
Lullaby of Life - or lol for short
Score: 3 Votes (Like | Disagree)

blicked
I wish they’d just give us the option to pay for the damn game. I’d rather pay a one time fee per game than subscribe to Apple Arcade. I don’t need or want another subscription in my life.
Score: 3 Votes (Like | Disagree)
Read All Comments

Sunday September 25, 2022 7:02 am PDT by Sami Fathi
Apple is gearing up to possibly replace its "Pro Max" iPhone with an all-new "Ultra" iPhone 15 model next year, reliable Bloomberg journalist Mark Gurman said today. Writing in his latest Power On newsletter, Gurman said that for the iPhone 15, Apple is planning a revamped design alongside USB-C and a potential name change. Apple could replace its "Pro Max" branding, which it started to use...
Read Full Article • 192 comments

Monday September 26, 2022 7:34 am PDT by Sami Fathi
Today marks exactly two weeks since Apple released iOS 16 to the public. Besides the personalized Lock Screen, major changes in Messages, and new features in Maps, the update has also seen its fair share of bugs, performance problems, battery drain, and more. After major iOS updates, it's normal for some users to report having issues with the new update, but such reports usually subside in...
Read Full Article • 168 comments