Apple Celebrates 30 Years of the Americans With Disabilities Act

Apple today shared a new feature celebrating the 30th anniversary of the Americans with Disabilities Act (ADA), which was signed into law on July 26, 1990. The law prohibits discrimination due to disability, and has led to significant improvements and awareness of accessibility to help disabled individuals navigate their worlds. 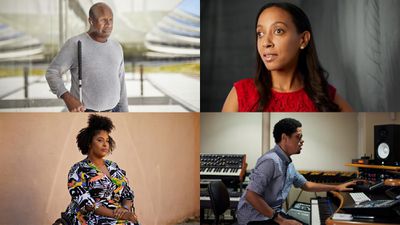 Apple has long been a champion of accessibility in its products, including numerous features and technologies as core components of its products, operating systems, and apps. The company's feature piece today shares quotes from an Apple employee, ADA activists, and others about both the overall benefits of the ADA and the part Apple has played in the movement.

Jazz musician Matthew Whitaker, who is blind, shares his thoughts on using VoiceOver on an iPod touch as a child, and has graduated to using Logic Pro X on a MacBook Pro to record his music.

Disability rights lawyer Haben Girma was the first Deafblind student at Harvard Law School, where she focused her studies on the intersection of the ADA and technology and has since helped push forward ADA accommodations in the online world.

Actor and model Tatiana Lee, who is paralyzed from the waist down due to spina bifida, discusses her efforts to support disability representation in Hollywood films and how Apple's technology like Voice to Text and Siri Shortcuts helps her be productive even when her hands are occupied performing other tasks.

And finally, Dean Hudson, an accessibility technology evangelist at Apple, talks about the strides Apple has made since he arrived in 2006, including VoiceOver for iPhone and the more recent Switch Control.

Bickley
Years ago - September 27th 2007 in fact - I was eating lunch outside of the cafe at Apple Infinite Loop campus with my coworker buddy Colin. At the next table over a blind man (I think his name is Dean) and a coworker of his who is not blind sits down. Who walks up to them? Steve Jobs. Sits down at their table, Jon Ivey at the next table over. Steve starts talking to the blind guy, asking him about his experience at Apple, what he does, how is Apple doing for those with a disability, what could Apple do better, etc. (we can hear a little of the convo). Stays with him for what I think is about 10 minutes before finishing lunch with Jon at the next table over, and invites ”Dean” to personally go see him (Steve) if there is every anything he or Apple can do to make his experience better.

Really stood out to me in the moment how much Steve cared and wanted to connect with an employee, so much so that I grabbed a pic. Great to see that “Dean” is still with Apple, and Apple continues to find ways to do right by it’s employees.

citysnaps
A big hat-tip to Apple for their commitment!
Score: 13 Votes (Like | Disagree)

Exactly. I remember WAY back in the day...Apple was the only tech company that even tried to develop for everyone and not only did they try, they had radical and wonderful solutions that helped untold numbers of people to be able to join with their fellow humans and use technology. They still focus on it and that's one of the reasons I am one of those wacky Apple fanboys.

I attended a college class with a blind woman. She used a MacBook Air. I had never given any thought to the accessibility features and in talking to her she said Apple is the ONLY systems she would use because these features are fully baked into her devices, not just poorly thought out afterthoughts.
Score: 10 Votes (Like | Disagree)

A big hat-tip to Apple for their commitment!

Exactly. I remember WAY back in the day...Apple was the only tech company that even tried to develop for everyone and not only did they try, they had radical and wonderful solutions that helped untold numbers of people to be able to join with their fellow humans and use technology. They still focus on it and that's one of the reasons I am one of those wacky Apple fanboys.
Score: 8 Votes (Like | Disagree)

Exactly. I remember WAY back in the day...Apple was the only tech company that even tried to develop for everyone and not only did they try, they had radical and wonderful solutions that helped untold numbers of people to be able to join with their fellow humans and use technology. They still focus on it and that's one of the reasons I am one of those wacky Apple fanboys.

Yeah, Apple took the lead on accessibility a long time ago. Glad they're still paving the way.
Score: 7 Votes (Like | Disagree)

jaybar
Not only is Apple committed to accessibility in their hardware and software—but also in hiring.

One day I needed to visit my local Apple store a few years ago. I was helped by a blind staff member, with a guide dog. I learned so much from her about accessibility features and how to use them. She was at the forefront, not because of her disabilities, but her ability. While I am visually impaired (not blind), my being linked with this staff person was totally accidental. At the time I went to the Apple Store, she had been with Apple for at least 5 years.
Score: 6 Votes (Like | Disagree)
Read All Comments

Sunday June 26, 2022 2:52 pm PDT by Joe Rossignol
Following the launch of Apple's new 13-inch MacBook Pro with the M2 chip, it has been discovered that the $1,299 base model with 256GB of storage has significantly slower SSD read/write speeds compared to the equivalent previous-generation model. YouTube channels such as Max Tech and Created Tech tested the 256GB model with Blackmagic's Disk Speed Test app and found that the SSD's read and...
Read Full Article • 377 comments

Monday June 27, 2022 7:31 am PDT by Joe Rossignol
TSMC will manufacture Apple's upcoming "M2 Pro" and "M3" chips based on its 3nm process, according to Taiwanese industry publication DigiTimes. "Apple reportedly has booked TSMC capacity for its upcoming 3nm M3 and M2 Pro processors," said DigiTimes, in a report focused on competition between chipmakers like TSMC and Samsung to secure 3nm chip orders. As expected, the report said TSMC will...
Read Full Article • 144 comments