Google is rolling out new bike sharing information as part of its cycling route coverage in Google Maps. The new feature means users will be able to get directions using rented bikes from docked bike-share schemes like Divvy in Chicago and Santander Cycles in London. 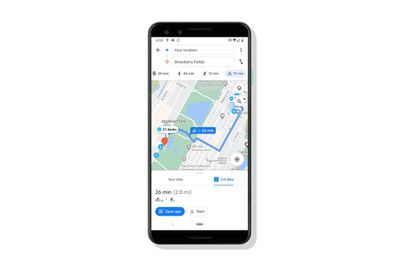 The functionality is rolling out over the coming weeks, after which users will be able to find docked bike share directions in the following 10 cities:

Google introduced biking directions in Google Maps ten years ago, and it's now available in nearly 30 countries. In iOS 14, Apple Maps route mapping will also consider bike lanes and dedicated cycling paths, and take elevation into account. The functionality will debut in the U.S. in New York, Los Angeles and San Francisco Bay, and Shanghai in China.

rmoliv
Google is years ahead of Apple in regards to maps... SAD!
Score: 6 Votes (Like | Disagree)

itsmilo
Not surprised we don’t have it in Berlin yet. Those bikes are almost literally flying around everywhere, but certainly not where they are supposed to be docked
Score: 1 Votes (Like | Disagree)

Google is years ahead of Apple in regards to maps... SAD!

That is because Google is literally years ahead. I do not know what is sad about that. AM has come a long way.
Score: 1 Votes (Like | Disagree)

Apple Macintosh 128K
Would be nice to see Niceride added. It's the second largest bike-share program in the US and now owned by Lyft.

I don't understand why everytime Apple, Google... needs to add functionality to New York, London and other well-advanced cities all the time. Why can't they rotate randomly. Like touching users from Balkans or Australia? What's wrong with them?

Large cities mean bringing the benefit to the largest number of people.
Score: 1 Votes (Like | Disagree)
Read All Comments