Apple this month published a support document that warns customers against closing their Mac notebooks with a cover over the camera as it can lead to display damage. 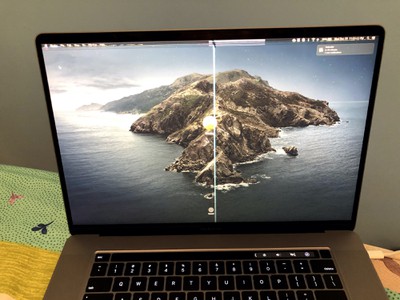 Image via Reddit
Apple says that the clearance between the display and the keyboard is designed to very tight tolerances, which can be problematic. Covering the camera can also cause issues with automatic brightness and True Tone.

If you close your Mac notebook with a camera cover installed, you might damage your display because the clearance between the display and keyboard is designed to very tight tolerances. Covering the built-in camera might also interfere with the ambient light sensor and prevent features like automatic brightness and True Tone from working. As an alternative to a camera cover, use the camera indicator light to determine if your camera is active, and decide which apps can use your camera in System Preferences.

The warnings from Apple likely stem from complaints from MacBook Pro owners who have seen their displays crack after covering the camera, and there are multiple reports and warnings on sites that include MacRumors and Reddit. The issue appears to be especially bad with the new 16-inch MacBook Pro models that have thinner bezels.

Image via the MacRumors Forums
MacRumors forum member Dashwin, for example, put a webcam cover on his 16-inch MacBook Pro in April and the result was a crack in the display under where the camera is located.

The latest MBP 16 inch with the thin tiny bezels and display comes at a cost of breakage with the tiniest of forces with a webcam cover in place. The internal display no longer works and I've had to connect it to an external display. I've had one of the exact same webcam covers on my 2011 MBP with no issues whatsoever for many years.

Damage from applying a webcam cover to the camera is considered accidental and can be repaired under AppleCare+, but it's quite possible it's an issue that Apple won't fix for customers that don't have ‌AppleCare‌+, and it's an expensive fix.

Apple says that customers concerned about illicit camera access should watch for the green light that comes on when the camera is activated. The camera is engineered so that it can't be accessed without the indicator light turning on.

MacBook owners can also control which apps have access to the built-in camera as users must grant permission for camera use on any operating system after macOS Mojave. For those who do need to cover the camera, Apple recommends a camera cover that's not thicker than the average piece of printer paper (0.1mm) and that does not leave adhesive residue.

AngerDanger
But I need the camera cover; I store all of my passwords by writing them directly on my forehead!

aforty
Maybe just use tape instead?
Score: 64 Votes (Like | Disagree)

Love it how paranoid people are.

"Paranoid"... former FBI Director covers up his webcam, why is that ya think? Source: https://thehill.com/policy/national-security/295933-fbi-director-cover-up-your-webcam
Score: 62 Votes (Like | Disagree)

scupking
I work in cybersecurity and I cover up my cameras as does everyone I know.
Score: 58 Votes (Like | Disagree)

Zakzilla
Maybe Apple should include a privacy cover then? They claim to be privacy focused but ironically leave their cameras completely exposed.
Score: 54 Votes (Like | Disagree)

Maybe Apple should include a privacy cover then? They claim to be privacy focused but ironically leave their cameras completely exposed.

As they said in the article the camera cannot be activated without the green indicator light being turned on and macOS gives you complete control over when and where your camera and microphones are used. So what's the point in that?
Score: 51 Votes (Like | Disagree)
Read All Comments

Sunday June 20, 2021 4:15 am PDT by Tim Hardwick
A wireless network naming bug has been discovered in iOS that effectively disables an iPhone's ability to connect to Wi-Fi. Security researcher Carl Schou found that after joining a Wi-Fi network with the name "%p%s%s%s%s%n" his iPhone's Wi-Fi functionality was left "permanently disabled." Changing a hotspot's SSID did nothing to correct the problem, with even a reboot failing to make a...
Read Full Article • 122 comments

Wednesday June 16, 2021 7:11 am PDT by Hartley Charlton
With no sign of redesigned MacBook Pro models at this year's WWDC, when can customers expect the much-anticipated new models to launch? A number of reports, including investor notes from Morgan Stanley and Wedbush analysts, claimed that new MacBook Pro models would be coming during this year's WWDC. This did not happen, much to the disappointment of MacBook Pro fans, who have been...
Read Full Article • 232 comments