A Google-backed group of European digital advertising associations has criticized Apple for requiring apps in iOS 14 to seek additional permission from users before tracking them across other apps and websites, reports Reuters. 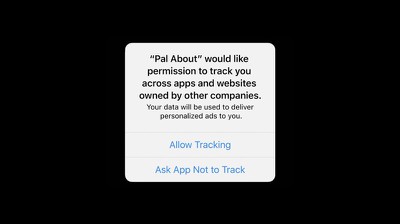 Sixteen marketing associations, some of which are backed by Facebook and Alphabet's Google, faulted Apple for not adhering to an ad-industry system for seeking user consent under European privacy rules. Apps will now need to ask for permission twice, increasing the risk users will refuse, the associations argued.

During its ‌iOS 14‌ preview at WWDC last week, Apple explained to developers several of its new user privacy features, which include new app tracking controls and transparency.

Specifically, developers are now required to get user consent before tracking them. When an app wants to track the user, a consent pop-up appears saying the app "would like permission to track you across apps and websites owned by other companies." Developers are given several lines below the main text to explain why the permission is being sought.

The system requires that apps only need to be granted permission once, and users can see which apps they have consented to track them in the Settings app, allowing them to change their preferences as and when required.

According to the report, the group of European marketing firms said the pop-up warning and the limited ability to customize it still carries "a high risk of user refusal."

Last week, however, Apple engineers said the company would improve a free tool for developers that uses anonymous, aggregated data to measure whether advertising campaigns are working. The tool does not trigger the tracking pop-up because it's specifically engineered not to track individual users.

Well, of course they'll be upset.

If that's the response Apple are getting, then it's just further evidence that Apple are doing the right things on this subject.
Score: 181 Votes (Like | Disagree)

According to the report, the group of European marketing firms said the pop-up warning and the limited ability to customize it still carries "a high risk of user refusal."

Moakesy
Who, exactly, do they think will give a damn?

can’t imagine many people saying “I’m not buying an iPhone, not until they allow more companies to track me more”.
Score: 81 Votes (Like | Disagree)

RobbieTT
Apple may be a trillion-dollar company, but this kind of advertising is priceless:

Apple should engrave that tag-line on their products.
Score: 75 Votes (Like | Disagree)

iLoveDeveloping
This just in Apple does something great to stop companies like Facebook manipulating us and selling our data to make billions and they don’t like it! I’m totally shocked!! ? Hey zuck - ??
Score: 70 Votes (Like | Disagree)
Read All Comments