Apple at WWDC announced Car Keys, a new feature designed to allow digital car keys to be added to the Wallet app on the iPhone, allowing iPhones and Apple Watch models to be used in lieu of a physical car key. 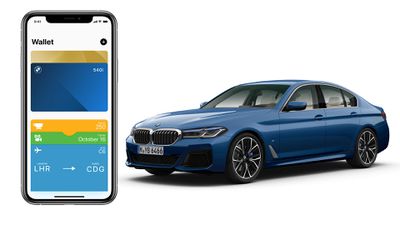 Apple at the time said the feature would come to both iOS 13 and iOS 14, and the first Car Keys partner, BMW, today added support for the feature to its BMW Connected app. With Car Keys support, a BMW Digital Key for the ‌iPhone‌ can be added to the Wallet app on the ‌iPhone‌.

The feature allows the ‌iPhone‌ to be used to lock and unlock the car by holding it up to the door handle, and it can also start the car when the ‌iPhone‌ is placed in the smartphone tray in the vehicle. Access to a car can be shared with up to five friends or family members, with various restrictions available.

For more on how Car Keys works and its feature set, make sure to check out our guide.

BruiserB
Now I just need a BMW made after yesterday.... :rolleyes:
Score: 33 Votes (Like | Disagree)

Happy I moved away from BMW.
Score: 14 Votes (Like | Disagree)

DarkCole
Excited to use this, in maybe 10 years.
Score: 10 Votes (Like | Disagree)

You know if you'd bought a Tesla it would have had this feature years ago, and that the Tesla would still be getting new features today?

Why on earth would someone purchase a car that wasn't a Tesla? We make fun of Android phones all the time on these forums for how they generally receive updates for about a year, then they rapidly age as they never get another update after that. Buying a non-Tesla is worse than that - a non-Tesla was generally last updated months-years before you bought it. It was worse than a Tesla when you bought it, and while the Tesla only gets better, everything else gets worse.

Sell your BMW now before you have to pay someone to get rid of it.

Other car manufacturers are finally getting the hint with CarPlay over their own poor systems.

Leave the tech to the tech firms.
Score: 6 Votes (Like | Disagree)
Read All Comments

Sunday January 23, 2022 2:59 am PST by Tim Hardwick
Apple has always emphasized the depth of thought that goes into the design of its products. In the foreword to Designed by Apple in California, a photo book released by the company in 2016, Jony Ive explains how the company strives "to define objects that appear effortless" and "so simple, coherent and inevitable that there could be no rational alternative." But every once in a while even...
Read Full Article • 298 comments

Sunday January 23, 2022 10:32 am PST by Juli Clover
Apple is working on a number of new products that are set to launch this fall, and Bloomberg's Mark Gurman says that it will be "the widest array" of new devices that Apple has introduced in its history. In his latest "Power On" newsletter, Gurman explains that Apple is working on four new iPhones (iPhone 14, iPhone 14 Max, iPhone 14 Pro, and iPhone 14 Max), an updated low-end MacBook Pro, a ...
Read Full Article • 153 comments