Benchmarks for an unreleased iMac equipped with a 10th-generation Core i9 Intel Comet Lake-S chip and an AMD Radeon Pro 5300 graphics card have surfaced, giving us an idea of what we can expect from a refreshed 2020 ‌iMac‌. 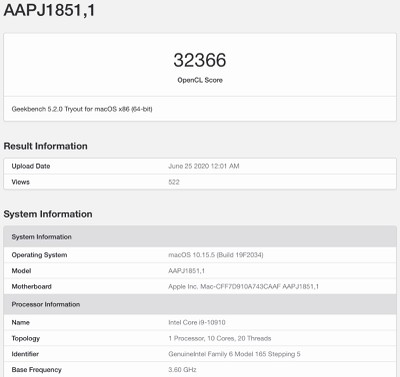 The Geekbench benchmarks, which appear to be legit, were found on Twitter and shared this morning by Tom's Hardware. The ‌iMac‌ in the benchmarks would be a successor to the 27-inch ‌iMac‌.

The unreleased ‌iMac‌ is also equipped with an as of yet unannounced AMD Radeon Pro 5300 graphics card, which seems to be a desktop version of the Radeon Pro 5300M released last year with Navi 14 silicon.

There's no word on when Apple might release an updated ‌iMac‌, but there were rumors suggesting a new machine could come at WWDC. Rumors have suggested an updated 2020 ‌iMac‌ might feature the first redesign we've seen in years with "iPad Pro design language" and thin bezels similar to the bezels on the Pro Display XDR.

The updated machine is expected to feature a T2 chip for security and controller functions along with an AMD Navi GPU and an all-flash storage setup. It's not clear what size it will be, but there have been multiple rumors suggesting Apple is working on a 23 or 24-inch ‌iMac‌ with an all new form factor.

Apple analyst Ming-Chi Kuo recently said the 24-inch ‌iMac‌ would be one of the first Macs to get an Apple Silicon chip in late 2020 or 2021, but said that Apple plans to refresh the existing Intel ‌iMac‌ in the third quarter of 2020, which appears to be the machine we're seeing in the benchmarks.

Whether the new machine features a new look remains to be seen, as the redesign could be something Apple is holding back for when the company is ready to debut its ‌Apple Silicon‌ chips. Apple said the first Mac with an Apple-designed chip would come in late 2020, but did not provide details on which Mac that would be.

It's possible that this Intel refresh will see Apple reusing the same 27-inch ‌iMac‌ design that hasn't been updated since 2012.

If they *DIDN’T* keep replacing intel machines to give folks one last chance for a “keeper,” you’d be groaning about that too.
Score: 60 Votes (Like | Disagree)

Unless you actually use your mac for work and not just browsing forums and watching youtube
Score: 38 Votes (Like | Disagree)

How so? It'll be supported for years to come. it'll run all the current apps. It'll run Win x64.

This is exactly what organization looks like. It gives longevity to Intel-based Apple computers for years rather than Apple completely jumping ship and quickly cutting off support. This is a graceful exit from relying on Intel.
Score: 24 Votes (Like | Disagree)

ChrisBos
If Apple is putting out a machine like this now, I feel like it has to bode well for Intel support even after the ARM transition is complete.

Or maybe they're just putting out a beast machine that their ARM iMac will demolish, just to prove a point ?
Score: 22 Votes (Like | Disagree)
Read All Comments