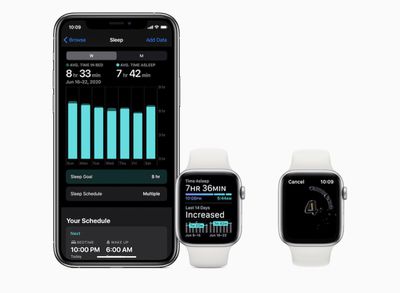 While some third-party apps provide very detailed sleep analysis, Apple's implementation of sleep tracking is fairly basic, focusing only on duration of sleep, movement disturbances, and heart rate. Lynch told CNET that this simplicity was an intentional decision, noting that Apple did research and found that extra data was not entirely useful.

"Movement of your arm is an input, but it's not a complete picture of what's going on inside your brain," said Lynch, as an example.

"You can't really coach yourself to have more or less REM stages," he added. "We felt like that wasn't the best way Apple could add value here on sleep. We focused on the transition to the bed, which we think is way more actionable, and will result in people getting a better night's sleep, which then has secondary effects of perhaps your REM stages sorting themselves."

Lynch said that, through research, Apple ultimately determined that duration of sleep is the most important metric.

"In any of these adventures we go on when building things here we ask, what will make the most difference for people that, from a mainstream perspective, will be easy, helpful and empowering," Lynch told The Independent.

Like many other health features on the Apple Watch, the Sleep app provides positive reinforcement only. If users meet their sleep goals, they receive positive feedback, but if they do not, the Watch stays silent.

"There could be anxiety that people have about going to sleep, and that anxiety itself can actually cause more problems in terms of going to sleep," Lynch told CNET. "Many people are already well aware that they haven't been getting enough sleep, and so we're not adding to that, but we are positively acknowledging when you have achieved your goals."

As for hand washing coaching in watchOS 7, Lynch told TechCrunch that the functionality was the result of "years of work." The feature encourages users to wash their hands for a CDC-recommended 20 seconds by providing a countdown with haptic feedback. If a user opts in, the feature automatically activates when the sound of hand washing is detected.

nebulousfish
Next: brushing your teeth detection
Score: 7 Votes (Like | Disagree)

Snowflake generation. I almost fell off my chair watching this at the WWDC. An app to tell you how long you're washing your hands for. I wonder how many well-paid engineers were tasked with solving this problem.

It reminds me that this company has way to much money and resources if they can afford to devote those things to this.

If you had fallen out of the chair I would hope you had an Apple Watch with fall detection. Is that also snowflake generation?

Just because a feature isn't for you doesn't mean others will not benefit from it. As pointed out by another poster I am sure not many people knew how long to wash their hands to be effective.

I would not condemn an entire generation because Apple engineers are having trouble finding useful applications for their techno baubles.
Score: 4 Votes (Like | Disagree)

nattK
I agree with him regarding sleep tracking. Short of an EEG, it’s nearly impossible to measure REM accurately let alone by something strapped onto your wrist. I like how Apple chose to forgo in-depth sleep tracking with the watch instead of providing inaccurate data.
Score: 3 Votes (Like | Disagree)

Relentless Power
Love the 20 second handwash feature. How many people before the pandemic and before this feature was available, knew to actually wash their hands 20 seconds for it to be affective for proper sanitization? (Rhetorical) I’m guessing not many. It’s at least serves as a reminder [Being the watch is health oriented] to be more mindful of thoroughly washing your hands for the proper amount of time.