Apple's Developer Transition Kit equipped with an A12Z iPad Pro chip began arriving in the hands of developers this morning to help them get their apps ready for Macs running Apple Silicon, and though forbidden, the first thing some developers did was benchmark the machine. 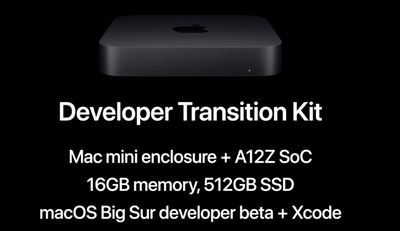 Multiple Geekbench results have indicated that the Developer Transition Kit, which is a Mac mini with an ‌iPad Pro‌ chip, features average single-core and multi-core scores of 811 and 2,871, respectively.

So the DTK with a two year old iPad chip runs x86_64 code, in emulation, faster than the Surface Pro X runs it natively 😅 Oh boy Qualcomm, what are you even doing? https://t.co/UAlZiwSsF8 — Steve Troughton-Smith (@stroughtonsmith) June 29, 2020

The Surface Pro X features a Microsoft-designed 3GHz Arm processor based on the Qualcomm SQ1 chip.

Apple's DTK provided to developers is just a test machine using an older A12Z chip (it's the same as the A12X chip in the 2018 ‌iPad Pro‌ but with an extra GPU core unlocked). Apple's Arm-based Macs that run ‌Apple Silicon‌ will have new chips designed for the Mac and based on the A14 chip created for the 2020 iPhone lineup with a 5-nanometer process.

Apple says its ‌Apple Silicon‌ Macs will bring major improvements in performance and power efficiency, and the first Arm-based Mac is set to be released before the end of 2020.

NickName99
This is absolutely hilarious. It’s running a 2 year old iPad processor, underclocked, under emulation, with only half its cores running, and it beats the Surface running native code.

The A14 gen Apple processor enabled Macs are going to be absolute beasts.
Score: 62 Votes (Like | Disagree)

though forbidden, the first thing some developers did was benchmark the machine ('https://www.macrumors.com/2020/06/29/rosetta-2-benchmarks-a12z-mac-mini/')

Rudy69
But people in the last thread told me the score was bad? /s

Let's not forget this is and older chip too. This transition is super exciting! I really can't wait to see what they do in the bigger form factors like the MacPro
Score: 34 Votes (Like | Disagree)

UltimateSyn
So just imagine what the actual Mac processors are going to do... :eek:
Score: 33 Votes (Like | Disagree)

m4mario
I cant wait for Mac to be truly ahead in performance as they used to be before the transition to Intel. Intel chips kind of flattened the market.
Score: 27 Votes (Like | Disagree)

iReality85
Apple: "Hey, we really don't want you to benchmark these machines." ?

Everyone else: ?
Score: 23 Votes (Like | Disagree)
Read All Comments

Friday August 12, 2022 12:46 pm PDT by Juli Clover
Samsung this week launched its fourth-generation foldable devices, the $1,000 Galaxy Z Flip and the $1,800 Galaxy Z Fold. Though there's no sign of a comparable Apple foldable device on the horizon, rumors suggest prototypes are in the works, so we thought we'd take a look at Samsung's newest smartphones to see what Apple needs to measure up to when a foldable iPhone does come out. Subscribe ...
Read Full Article • 329 comments