Apple today sent out emails to some former Apple Arcade subscribers, offering them another month of free access. 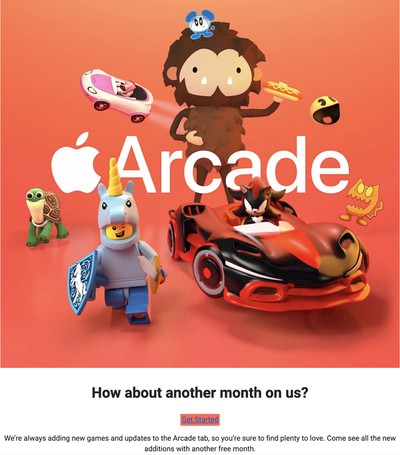 It's not entirely clear how many people are receiving the additional month of Apple Arcade service to try it out, but the emails may be going out to those who tried ‌Apple Arcade‌ for a month and then canceled it after the trial period was over.

For customers who used their free month trial right when the ‌Apple Arcade‌ service came out, there was a limited number of games available. Apple has been regularly releasing new ‌Apple Arcade‌ games and there are now over a hundred, all of which are free from in-app purchases and ads.

Apple may be wanting to provide those early subscribers with a chance to test the service in its more fleshed out form, with many more game titles to choose from. Those who received the email can tap on the "Get Started" text to receive a promo code to input into ‌Apple Arcade‌ for the additional free month.

After a one-month free trial, Apple Arcade is priced at $4.99 per month, and that price tag provides access for the whole family.

WalterTizzano
I had it for a while then decided to stop the subscription. The games were really not worth it. I’d rather have 20 good games rather than 100 bad ones.
Score: 13 Votes (Like | Disagree)

now i see it
Lots of nibbles, not many bites
Score: 8 Votes (Like | Disagree)

simonmet
Lol. They must need to get the numbers up for an annual report or something.
Score: 7 Votes (Like | Disagree)

MrJM
Bar neo cab and what the golf, I wasn’t overly impressed. Most of them are just throw away games you play for a few minutes and forget about. I’d rather spend on a full blown PS4 or switch game than this! For example, I recently bought Resi 2 for £15 and it’s fantastic! I’d take that over three months of Arcade anyday!
Score: 4 Votes (Like | Disagree)

anthogag
Why aren’t there much more “mature” and “adult rated” games on Arcade?
Score: 4 Votes (Like | Disagree)
Read All Comments

Monday July 6, 2020 7:53 am PDT by Mitchel Broussard
Tom Hanks' WWII drama "Greyhound" is set to premiere on Apple TV+ this Friday, July 10, and ahead of that debut the actor gave an interview with The Guardian discussing the film. "Greyhound" was originally planned to see a theatrical release this summer, and was repeatedly delayed in the wake of the ongoing Covid-19 pandemic. Apple won the streaming rights to the film, and in the new...
Read Full Article • 184 comments

Monday July 6, 2020 2:04 pm PDT by Juli Clover
Ahead of the launch of new iPhones we often see dummy models created based on leaked schematics and specifications, with those models designed to let case makers create cases for the new devices ahead of their release. We got our hands on a set of dummy models that represent the iPhone 12 lineup, giving us our first close look at the iPhone 4-style design and the different size options. Subscri ...
Read Full Article • 84 comments