The Information today published a detailed look at the difficulties Apple has faced trying to assemble its products with robots rather than humans. 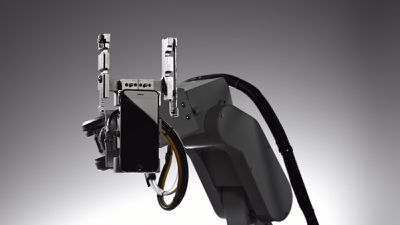 The report claims that, beginning in 2012, Apple assembled a team of robotics and automation specialists at a secret lab in Sunnyvale, California to search for ways to reduce the number of workers on its production lines. However, the team is said to have quickly encountered challenges designing some of these automated systems:

Building a robot that can fasten screws is among the hardest challenges in the industry. A robot must pick up the screw at a specific angle and align it with a hole using multiple industrial cameras. Apple uses screws so tiny that robots had no way to measure the force used to drill them in. By contrast, human workers can feel the resistance from their hand and can tell when something is off.

As for putting glue onto display panels, Apple’s specifications are so tight that glue must often be placed within a millimeter of its desired spot inside a product. One former team member said well-trained Chinese workers were more adept at applying glue than their robot counterparts.

While many of the automated systems were abandoned or not implemented, the team apparently did have some success replacing workers with robots for simpler tasks such as testing of products like the Apple TV, Apple Watch, and iPad.

The report provides many more examples of Apple's attempts at ramping up automation, only to experience challenges. In 2014, for instance, Apple attempted to automate assembly of its since-discontinued 12-inch MacBook, but the production line apparently turned out to be more trouble than it was worth due to various issues:

In early trials, the conveyor systems moved erratically, slowing down the movement of parts. A robot that installed the keyboard using 88 small screws kept malfunctioning, requiring humans to come in afterward and rework most of the process. Containers used for moving parts kept piling up on conveyors, creating traffic jams.

These issues apparently led Apple to delay the launch of the 12-inch MacBook by around six months. The notebook was released in April 2015.

The report concludes that, while Apple has not had much success using robots to assemble its products as a whole, automation can be effective for specific parts. A few years ago, Apple also introduced a robot named Daisy that can take apart up to 200 iPhone devices per hour, removing and sorting components for recycling purposes.

AngerDanger
"Man, I gotta say, ever since we hired that John guy, these machines just haven't been testing as well…"

NMBob
If they weren't so hard to repair maybe they would be easier to build.
Score: 23 Votes (Like | Disagree)

szw-mapple fan
Same thing Tesla discovered when they tried to automate all of the Model 3's production. Robots just aren't precise enough at the moment for some tasks. That will change in the years to come, but it will remain this way for the foreseeable future.
Score: 18 Votes (Like | Disagree)

Interesting....Tim wants to help mankind, help the vulnerable etc. etc. but his company has been striving to come up with ways to reduce the number of workers. I am confident that the robots will regularly send food packages to the families of the workers who are terminated.

By your argument we shouldn’t automate any menial jobs.

The reasons Apple want to do this are to improve quality, to be able to do manufacturing in countries without millions of laborers willing to work for a couple dollars a day, and to allow workers to spend time on higher-valued jobs.
Score: 17 Votes (Like | Disagree)

Glad to hear people are not replaceable yet.

Have you not been to supermarkets, drug stores, banks etc. recently? They are attempting to force us to use self-service scanning and cash out tills so they can fire millions of people. And for the most part we are bending and happily accommodating their wishes. Not even a discount on our purchases for doing so. We are blindly putting our neighbours on the unemployment line.
Score: 16 Votes (Like | Disagree)

By your argument we shouldn’t automate any menial jobs.

The reasons Apple want to do this are to improve quality, to be able to do manufacturing in countries without millions of laborers willing to work for a couple dollars a day, and to allow workers to spend time on higher-valued jobs.

But many of the workers who are terminated from assembly line type jobs do not have the skills and will not be trained to take on the higher valued jobs. In North America (and very probably other areas) over the past 20 years the work opportunities for these people (high school graduates or lower education) have been cancelled (many sent off shore). Many of these folks have been left with nothing or having to repeat "And would you like fries with that?" for 8 hours a day.
Score: 15 Votes (Like | Disagree)
Read All Comments