Hulu is testing a new "Watch Party" feature that's designed to allow up to eight people to watch TV shows and movies together through the Hulu website and chat with one another while the content is playing. 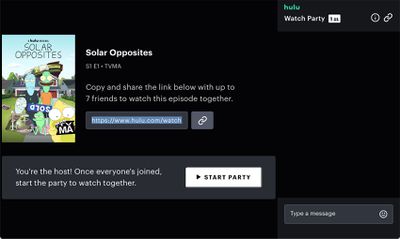 Some Hulu users who sign in on the web will see a popup describing the new Watch Party option, which is available for a select number of TV shows and movies. Watch Party is limited to customers who have the Hulu plan with no ads, and it is only on the web at this time

We're testing something new on hulu.com so you can watch together, even when you're apart. Start a Watch Party by clicking the watch party icon on the details page of your favorite shows and movies. Try it and tell us what you think.

Starting a Watch Party with friends can be done by choosing a TV show or movie that supports the feature and clicking on the Watch Party icon. Hulu then provides a link that can be shared with up to seven people, and when everyone has joined, the host can start the show.

Participants need to be logged into Hulu and watchers need to have the no ads Hulu subscription, priced at $12 per month. As the TV show or movie plays, participants can chat with one another through an included chat box, and each person using the service can control their own playback without impacting the rest of the group.

Watch Party is a Hulu-built feature that works in any browser that supports Hulu streaming, with no plug-ins or extensions required.


Along with Hulu, Plex has also announced a new "Watch Together" beta feature today, which is designed to allow multiple people to watch movies and TV shows through Plex for free. The feature works with all free on-demand content on Plex, as well as content from personal media libraries.

Plex's feature has no communication option, however, and Plex recommends viewers use a separate chat app such as Zoom. Watch Together works on iOS, tvOS, Android devices, and Android TVs. Plex's Watch Together feature is an early release and more functionality will be coming in the future. Unlike Hulu's Watch Party, Watch Together is free to use.

Can I pay Hulu more to let me never see A Night At The Roxbury?

Maybe this will inspire Netflix to officially offer something similar to Watch Party, the Chrome add-on Netflix Party is pretty bad.

If the other streaming services are have any brains, they’ll be racing right now to add a watch party-style feature, because it’s a terrific way to drive subscriptions. Scenario:

6 friends want to watch a movie/show together during quarantine, and 4 of them have Hulu => strong motivation for the other two to subscribe. Then some other subset of those friends, including the new subscribers, pull in sill more friends. Rinse/repeat.

I remember back in the day of early Xbox 360 when you could watch movies at the same time as friends. Your avatars would all sit in a movie theatre setting and watch the video.

Just wait for Apple Glasses. You’ll be able to sit on your couch and watch the movie, and look to your left and right and see your friends avatars sitting next to you. Pass the popcorn.
Score: 2 Votes (Like | Disagree)

biggest father1
I remember back in the day of early Xbox 360 when you could watch movies at the same time as friends. Your avatars would all sit in a movie theatre setting and watch the video.
Score: 1 Votes (Like | Disagree)
Read All Comments