Back in October, Microsoft decided to get into the wire-free earbuds market with the debut of the Surface Earbuds, designed to compete with Apple's AirPods, Google's Pixel Buds, and Samsung's Galaxy Buds.

Subscribe to the MacRumors YouTube channel for more videos.
We picked up a pair of Microsoft's Surface Earbuds to check out the feature set and see how they measure up to Apple's AirPods.

Priced at $199, the Surface Earbuds have a design that's rather... unique. There's an AirPods-style earpiece that fits into the ear, along with a circular exterior portion that's rather large and noticeable, designed primarily for touch gestures. The Surface Earbuds are not low-key, hard to see headphones -- it's obvious when you're wearing them. 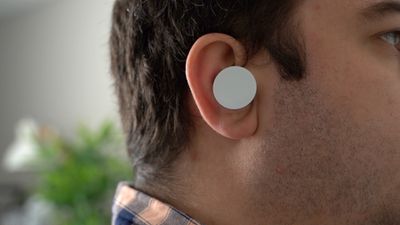 The design of the Surface Earbuds definitely looks a bit funky, but it's functional because of the simple and effective gesture set, which uses the large surface area of each earbud.

A double tap plays/pauses music, a swipe on the left earbud skips tracks, and a swipe on the right earbud controls the volume. AirPods don't have gesture controls for volume, which is one of the major negatives when it comes to AirPods gestures.

There are also controls for accessing voice-based help and answering/ending phone calls, plus several Microsoft apps can take advantage of Surface Earbuds gestures. On an Android phone, for example, a triple tap on either earbud opens up the Spotify app. On iOS, you can listen to, delete, and reply to emails with touch and voice using the Outlook app, and in PowerPoint, you can swipe to advance slides, enable live captions and subtitles, and have what you're saying be translated into one of 60 languages.

Sound quality on the Surface Earbuds was somewhat unimpressive. The low end was disappointing and on the whole, music playback had a tinny quality. There is an app that accompanies the Surface Earbuds for EQ adjustments, which helps improve the sound somewhat. There's no Active Noise Cancellation, so the only sound isolating comes from the fit of the Surface Earbuds in the ear.

The Surface Earbuds have a six to eight hour battery life, which is extended to 24 hours with the included USB-C charging case, which has a rectangular design reminiscent of a little coffin. The case charges over USB-C, and there's no wireless charging included.

When paired with a Surface device or a Windows PC running Windows 10, which is what the Surface Earbuds are designed to work with, there's a Swift Pair feature for fast pairing, but on iOS devices, the connection will need to be done through Bluetooth settings.

Surface Earbuds are fine if you plan to use them with a PC or a Surface device, but there's no reason to pick these up if you're planning to use them with a Mac or an iPhone because the full feature set is restricted to Windows. Given the $199 price point, these are best for those who are in Microsoft's ecosystem rather than Apple's.

Waxhead138
These things look like the stickers you put on cheap furniture to cover the nail / screw heads.....or a drywall filler applied to ones ear....
Score: 21 Votes (Like | Disagree)

calzon65
They look like those huge pierced earlobe earring/inserts that missed the earlobe.
Score: 14 Votes (Like | Disagree)

Apple Knowledge Navigator
The touch gestures sound great; but for $199 it seems to me like a hard sell when the main feature - the audio quality - isn’t on par with competition.

And frankly, the design looks very ambiguous. At least with other earbuds an on-looker knows What you’re wearing, these don’t look like anything.

djcerla
And once again, even in the absence of Steve Jobs, Apple has an unique, courageous product that it’s iconic, cool, and defines its own category, while producing metric tons of cash.

thedarkhalf
This is all I see when I look at them..

"Looks like you have tampons hanging out of your ears"

And strangely EarPods, which look pretty much identical (just a bit smaller I think), but with wires, never produced that comment..

Honestly, I think people going about and wearing huge traditional Beat, Bose or Sony headphones etc. look even goofier than someone with relatively discreet buds in their ears.

These Surface ones do look weird though..

(but just wear whatever you want)
Score: 8 Votes (Like | Disagree)
Read All Comments