Apple Stores in Canada will begin reopening their doors to the public today, starting with six locations in the Vancouver area, one in Winnipeg, and one in Halifax. Enhanced health and safety measures will be in place, such as social distancing and reduced operating hours. Apple is also requiring that all employees and customers wear a face covering while inside the store and will provide one to customers who do not bring one. 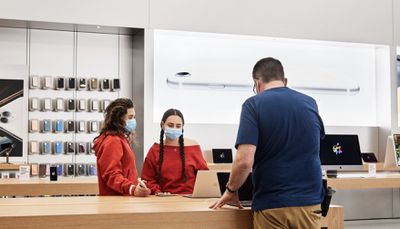 The following locations will reopen today, most at 11 a.m. local time:

Apple's four stores in Alberta will follow on Thursday:

Apple Stores across Ontario and Quebec remain closed for the time being.

In a letter to customers this week, Apple said that it looks at all available data before deciding to reopen a store, including local cases, near and long‑term trends, and guidance from national and local health officials. Apple also said that it would not rule out the possibility of closing a store again should local conditions warrant.

The Winnipeg (Polo Park) one is opening, it's in a mall, and doesn't have street access (separate entrance) so that is not correct.

Much like the lockdown rules in the U.S. are being determined by the state governments, the rules in Canada are also being made on a province-by-province basis. Ontario has only authorized retail stores with street access to open as of this week (May 19th), while malls must still remain closed until further notice. All of the Apple Stores in Ontario are located in malls.

Quebec has a couple of stores in Montreal with street access, but I don't think Quebec is allowing most retailers to open until next week regardless of their location.
Score: 3 Votes (Like | Disagree)

statik13
Hopefully they provide gloves or a hand sanitizer station too. So many touchable devices.
Score: 2 Votes (Like | Disagree)

Hopefully they provide gloves or a hand sanitizer station too. So many touchable devices.

I really doubt they're gonna open up for casual browsing. It'll be a buy-it-and-get-out scenario.
Score: 2 Votes (Like | Disagree)

Basically any Apple Store inside a mall in Canada remains closed, unless it has a separate entrance to the street.

The Winnipeg (Polo Park) one is opening, it's in a mall, and doesn't have street access (separate entrance) so that is not correct.
Score: 2 Votes (Like | Disagree)

IOW, a properly trained medical professional might be able to use a N95 mask as designed, but most actually don't, and almost everyone who hasn't been properly trained to wear one will be doing it wrong, so N95 for the general public is almost pointless.

Not to mention they're designed to be disposable, making them even less practical for consumers.
Score: 1 Votes (Like | Disagree)
Read All Comments