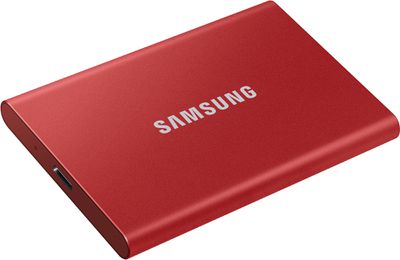 Samsung first announced the new T7 Portable SSD in January at CES, but focused on releasing the more expensive T7 Touch with fingerprint sensor first. The T7 Portable SSD is similar to the T7 Touch, measuring in at the size of a business card.

The pocketable Samsung T7 SSD is made from a durable titanium metal case and is available in Metallic Red, Indigo Blue, and Titan Gray finishes. It is shock resistant and can withstand falls of up to two meters.

Samsung's T7 Portable SSD supports data transfer speeds of up to 1,050Mb/s. It's designed to work with all Macs and PCs, shipping with a USB-C to USB-C cable and a USB-A to USB-C cable.

Samsung says the T7 Portable SSD can transfer a 10GB 4K UHD video in just over eight seconds, and 200 10MB pictures in just over two seconds. A three-year limited warranty is included, and optional password protection with AES 256-bit hardware encryption can be turned on.

CheesePuff
The T5 is a great device, use it as my iMacs main boot drive.
Score: 14 Votes (Like | Disagree)

Why not buy the one with the fingerprint reader for $20 more?

What is the fingerprint reader good for? All my hard drives are always encrypted, and work as long as they're connected to my Mac and not a second longer.
Score: 6 Votes (Like | Disagree)

Samsung says the T7 Portable SSD can transfer a 10GB 4K UHD video in just over eight seconds, and

Why not buy the one with the fingerprint reader for $20 more?

paulvee
Doesn't seem to be listed yet.
Score: 4 Votes (Like | Disagree)

incoherent_1
I’d love to see at least a 4TB model. Otherwise I’ll just keep my older T5, which is still a fantastic drive in its own right.
Score: 4 Votes (Like | Disagree)
Read All Comments