DxOMark this week published the results of its in-depth review of the iPhone 11's 12MP front-facing camera. The device delivered "decent performance" and achieved an overall score of 91 points, but failed to make the overall top 10. 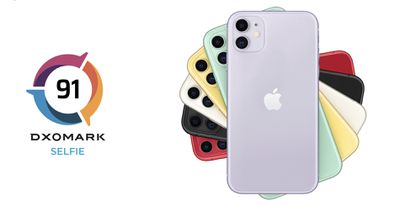 ‌iPhone 11‌ and ‌iPhone 11‌ Pro share the same front-facing camera specifications, so the results are similar but with a number of key differences, such as focus distance. The fixed-focus lens of ‌iPhone 11‌ was found to focus slightly closer than the lens on the iPhone 11 Pro Max, which resulted in subjects that are further away being out of focus. Another difference was that ‌iPhone 11‌ failed to maintain sharpness as well as ‌iPhone 11 Pro Max‌ as the subject moved further away from the camera. Otherwise, most images taken with the two devices were extremely similar.

Video on the ‌iPhone 11‌ front-facing camera was, however, found to be "slightly better" in color accuracy and noise-management than Apple's top-end smartphone. This advantage is, however, diminished by the focus issues, which are said to pose a potential problem for "users who work with longer selfie sticks or who shoot a lot of group selfies". The review concludes that ‌iPhone 11‌ offers a "good option for selfie video capture, but not among the best we have seen."

The ‌iPhone 11‌'s overall DxOMark score of 91 was just one point lower than that of the ‌iPhone 11 Pro Max‌ at 92. The Huawei P40 Pro has performed best in DxOMark testing, with a score of 103. ‌iPhone 11‌'s front-facing camera is surpassed by 12 other smartphones. Overall, ‌iPhone 11‌ is praised as "a capable option for selfie shooters, with its front camera delivering nice colors and good exposure in most situations," but "image output can be quite noisy and the fixed-focus lens, which is geared towards closer focusing distances."

DxO is a well-known French image lab that is noted for its attempts at assigning objective scores of smartphone camera quality, although they have been subject to some criticism from those who argue that camera quality is inherently subjective and thus can't be quantified with a score.

Who really cares about these scores they don’t mean nothing

Kylo83
Who really cares about these scores they don’t mean anything, companies pay them to score, none of their scores mean anything to me
Score: 16 Votes (Like | Disagree)

Front facing camera has always been a low priority on iPhones and for good reason. Personally I've never used it on any iPhone I've had.

Low priority based on what? They even have ads that highlight the tech of the camera. Adding 4K/60fps video capability to the camera definitely doesn't indicate it's low priority.

Honest question, is the MacBook camera really that bad comparatively? When I participate in video calls, the camera on my 2015 MacBook Air always looks a lot better than most (if not all) Windows laptops...
I realize this is anecdotal, so do truly good laptop cameras exist?

Mac cameras aren't garbage, but there's no excuse for them being as average as they have been for a long time. If other windows and chromebooks can do better, there's no reason Apple can't. I don't think laptop cameras are going to get as good as phone cameras (no room), but they don't have to be as average as they are either.
Here's a good look at what I'm yammering about:
Score: 8 Votes (Like | Disagree)

now i see it
Front facing camera has always been a low priority on iPhones and for good reason. Personally I've never used it on any iPhone I've had.
Score: 7 Votes (Like | Disagree)

BF1M
The phone has been out for 8 months now....
Score: 6 Votes (Like | Disagree)
Read All Comments