An X-Ray View of Apple's Magic Keyboard for iPad Pro

iFixit hasn't yet done a full teardown of the new Magic Keyboard designed for the new iPad Pro models, but the repair site today partnered with x-ray company Creative Electron to create Magic Keyboard x-rays that give us a view of just what's inside. 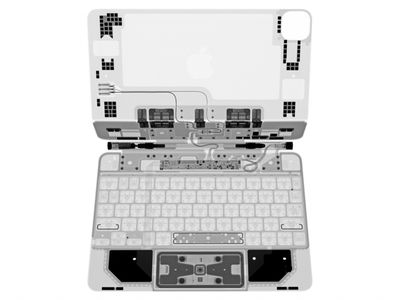 The Magic Keyboard uses scissor switch keys instead of butterfly keys, which have now been effectively eliminated from Apple's product lineup. The scissor switch mechanism is clearly visible in the x-ray view, and iFixit calls it the simplest mechanism in the accessory, but the biggest improvement compared to the Smart Keyboard.

Below the keyboard, there are metal plates that iFixit believes are for reinforcing the keyboard's body against bending, and the trackpad is a new design that's different from MacBook trackpads.

There appear to be multiple buttons under the trackpad to capture presses, while the MacBook Trackpads have no buttons and simulate presses with haptic feedback.

There are at least two spring loaded hinge designs at the folding point, featuring both a small coil and a larger coil, plus there are two cables for connecting the Smart Connector to the keyboard for power and data transfer.

Lots and lots of magnets are visible in the x-ray, with the magnets used to hold the Magic Keyboard on the ‌iPad Pro‌. There's a whole ring of tiny magnets around the camera cutout, which iFixit said was a "lot of little polarized bits" to line up, space out, and configure with the ‌iPad Pro‌ components.

According to iFixit, there's more going on in the Magic Keyboard than there is in many laptops, which could explain its price point. Apple charges $299 for the 11-inch Magic Keyboard and $349 for the 12.9-inch version.

$80 worth of engineering and materials at most.

If that’s true, there will be 1-3 products with every single feature, and with *all* the complexity we see here, on the market before Fall. They’ll be priced under $150 while enjoying healthy margins.

But of course that won’t happen, because you pulled that number out of your lower orifice.

Remember that Apple generally shoots for 35-40% margins. They‘re not shy of over-engineering and making the customer pay for it. But they generally don’t command 400% margins (On items costing more than $50, anyway.)
Score: 31 Votes (Like | Disagree)

So... are you guys still going to complain about the price?

$80 worth of engineering and materials at most.

In 10 years of iPad production there has not been a SINGLE keyboard option that offers even a fraction of the usability and features as this one, at any price.

If your statement had even a shred of merit, we’d see dozens of decent products.
Score: 24 Votes (Like | Disagree)

UltimateSyn
So... are you guys still going to complain about the price?
Score: 19 Votes (Like | Disagree)

But does it bend?

It folds.
Score: 17 Votes (Like | Disagree)
Read All Comments