After years of complaints over sticky or unresponsive keys, Apple has finally finished transitioning its notebook lineup away from its issue-prone butterfly keyboard. 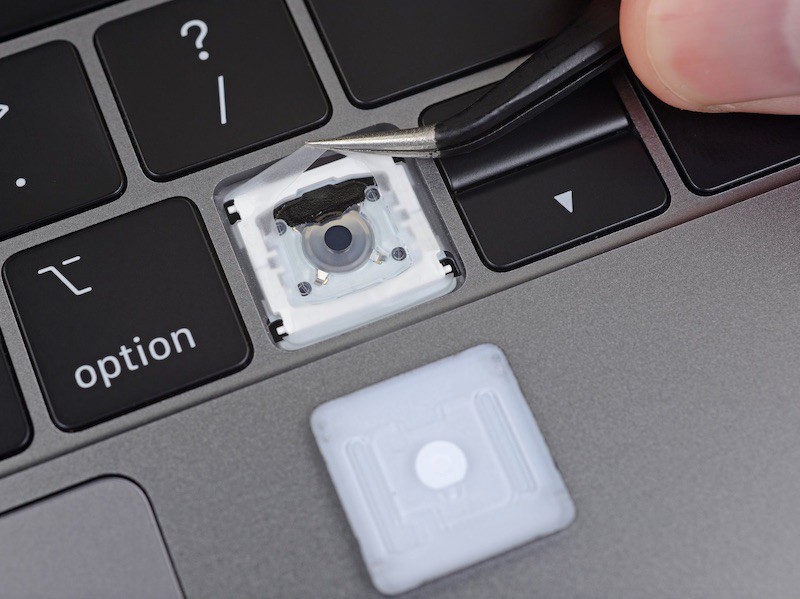 Image: iFixit
First introduced on the 16-inch MacBook Pro last year, the Magic Keyboard features a redesigned scissor mechanism with 1mm of key travel, an inverted-"T" arrangement for the arrow keys, and a physical Escape key next to the Touch Bar.

Apple's butterfly keyboard suffered from issues with sticky, repeating, or nonfunctional keys. The company continues to offer free repairs to affected customers as part of its worldwide service program, and it even apologized over the matter last year, although it downplayed the issue and said that only a "small number" of customers were impacted.

Skeith
Thank you for beta testing everyone.
Score: 63 Votes (Like | Disagree)

Blackstick
I manage a small IT department, on a population of 2200 Macs, we had 378 keyboard (top case) repairs logged through GSX in 2019. Don't buy butterfly keyboard Macs, folks. On a population of 6300 Dell Latitudes, we submitted 41 keyboard repairs for 2019, respectively.

joelhinch
You won’t be missed.
Score: 44 Votes (Like | Disagree)

sofila
I just recall a long list of forum members explaining us why this keyboard was incredible and any issue mentioned was just a form of unjustified hatred. "Mine works perfectly" attitude.

Now I wonder, what weight should I give to them from now on?
All this arrogance, all these irrefutable certainties thrown into the toilet.
Score: 34 Votes (Like | Disagree)

I honestly think most of the naysayers didn’t actually own one. I owned all three generations of the keyboard and never had an issue. None of my coworkers who have various iterations of the keyboard have had issues. I’m not saying issues didn’t exist, but like most issues reported in this forum, I highly suspect they’re massively overblown.

Apple apologists never stop twisting themselves into pretzels trying to defend what after 3 years was clearly one of the worst and most expensive decisions in the company's history. I find it utterly amazing that there are still people who try to act like those of us who had multiple keyboard/topcase replacements were just loud and obnoxious and didn't own them. My 2017 MBP was in need of its 3rd keyboard replacement when i traded it in for a 16" MBP -- and I have owned a MB Air (with the same keyboard design) since my MBP's keyboard first failed on a business trip and I needed a computer while Apple repaired it. Sure, I could have returned it within 30 days and not gotten stuck with the expense, but given all the reports it was a good decision, seeing the keyboard failed two more times. But having to buy a backup to a brand new $3500 laptop just so I can keep typing means YES, I am going to complain like hell about the issue.
Score: 20 Votes (Like | Disagree)

ouimetnick
Another quality Jony Ive innovation. He had a good run as well?
Score: 18 Votes (Like | Disagree)
Read All Comments