Apple and Google today are providing public health authorities around the world with new resources to help them make COVID-19 exposure notification apps, including sample user interfaces and sample code for iOS and Android.

iOS 13.5 will include a new menu in Settings > Health > COVID-19 Exposure Logging that indicates which public health authority app a user is using, in addition to showing the number of times that a user's exposure log has been checked in the past 14 days. 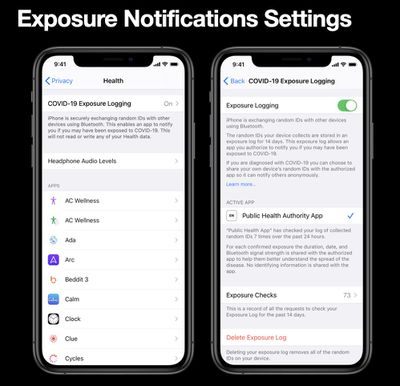 If a user is potentially exposed to COVID-19, they would receive a push notification from the public health authority's app.

Here's what the app could display when a user goes to report a positive COVID-19 diagnosis:

Apple and Google today also shared a list of requirements that all developers of apps that use their Exposure Notifications API must adhere to:

Last week, Apple seeded the third beta of iOS 13.5 with the code needed to run apps built using the Exposure Notifications API, and it continues to target mid-May for a public release of the software update. Apple also released the first beta of Xcode 11.5 with a new version of the iOS SDK incorporating the API.

Apple and Google said their API is just one component of the broader efforts that public health authorities are undertaking worldwide to help curb the pandemic, including testing, traditional contact tracing, and containment.

For more details on the API, read our previous coverage and Apple's FAQ.

Hopefully you educate yourself (using reputable sources) on the differences between Covid-19 and the flu and stop spreading misinformation.
Score: 24 Votes (Like | Disagree)

Good insight Texas, comparing the worst pandemic in 100 years to the flu. This is why your country has the highest death rate and cases on earth.
Score: 16 Votes (Like | Disagree)

So based on this new information, Apple and Google will allow individual Country apps to be added even though they will collect personal data.

Does everyone react this strongly when an app requests access to use your GPS? Imo, that’s much more of a concern than this.

It’s GOOD to be paranoid about privacy. But imo, they’re being plenty cautious here.
Score: 14 Votes (Like | Disagree)

TechieGeek
TheVerge shared a lot more screenshots of the user flows, if folks are interested: https://www.theverge.com/2020/5/4/21246512/apple-google-code-sample-ui-ios-android-contact-tracing-exposure-notification
Score: 12 Votes (Like | Disagree)

Of course that's ridiculous. But go ahead and stir the pot.
Score: 9 Votes (Like | Disagree)

Apps are prohibited from seeking permission to access Location Services.