Apple has updated the search feature in the Apple Maps app to focus on categories that are most important to people right now: groceries, food delivery, pharmacies, hospitals, and urgent care. 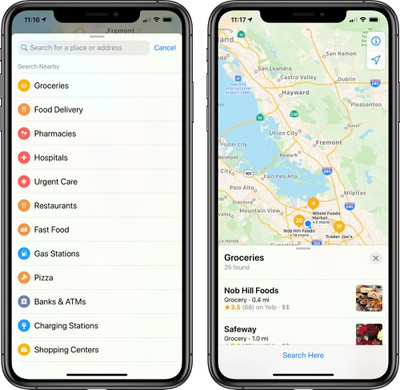 These category options come up first when searching, coming ahead of restaurants, fast food, gas stations, banks, and other categories that used to be higher priority in the list.

Places that are currently closed, such as shopping centers, are at the bottom of the search category list. These changes were first noticed by German site iPhone Ticker, which also points out similar changes that have been made in the Google Maps app.

Google Maps has gone even further than ‌Apple Maps‌, letting users know when a business is closed or has shorter hours. The app also warns users to call a doctor before visiting a medical location.

who actually uses apple maps when you have something like google maps?

People that prefer a much cleaner interface, integration with Siri/Apple Watch/Car Play/Calendar events with Location and have used it perfectly for years with no issue.
Score: 16 Votes (Like | Disagree)

that maybe true for the US, but worlwide it does not come even closer. And I think the clean interface is more about lacking data than the UI itself.

Lack of data is not completely true. It's also about how the data is presented. I open up Google Maps and see a cluster of overwhelming information. A search for something yields results with large photo arrays of each business instead of just a list of my results. It's like Google tries to display as much as possible at once and is just a mess of an interface. Apple presents things cleaner and then allows me to narrow down and get more details as needed.
Score: 8 Votes (Like | Disagree)

that maybe true for the US, but worlwide it does not come even closer. And I think the clean interface is more about lacking data than the UI itself.

Are you suggesting that people in the US should avoid Apple Maps because people outside the US don't like the data?

And, no, the clean interface is about being able to easily parse the necessary information from the screen at a glance. It displays all the data I need. Google Maps' UI is cluttered with junk I don't want.

who actually uses apple maps when you have something like google maps?

apple should just ditch apple maps already. it makes no sense really, its so much worse than competitors.

Translation: tyranne201 doesn't like Apple Maps, so nobody should be allowed to use it. Glad you're not in charge. I have both and strongly prefer Apple Maps. Better UI, more easy to parse at a glance, and always gets me where I want to go.
Score: 5 Votes (Like | Disagree)

hagar
Great. They swapped some items in a list. Took them 45 seconds to implement and push live.
Google shows temporarily opening hours, while Apple Maps doesn’t even show regular opening hours for many businesses.
Score: 2 Votes (Like | Disagree)

vicviper789
All I want at this stage is An Adblock like utility to block all references to Covid and coronavirus And the stupid emails
Score: 2 Votes (Like | Disagree)