Across the United States and other countries, adults and children alike are stuck in their homes for work, school, and more amid the ongoing pandemic, so Apple has is offering a collection of curated content across all of its apps that's aimed at families. 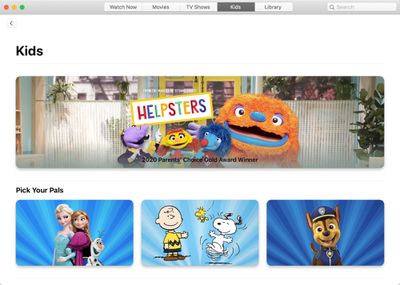 In the Apple TV app, Apple has a Kids tab available that sorts TV shows and content by age, plus there are a number of children's shows on Apple TV+, including "Snoopy in Space," "Helpsters" and "Ghostwriter."

In Apple Music, curators have put together a number of playlists and radio stations aimed at children and families, listed below.

Apple Podcasts is featuring a number of podcasts designed for kids, such as "Get Smart, Stay Smart" and "Stories and Adventures."

As Apple announced earlier this month, the Apple Books app also has a number of free books and audiobooks that are for children, including "Winnie the Pooh," "The Secret Garden," "Sesame Street Classics," and more.

The App Store also has quite a few apps that offer free content that can keep children entertained.

All of the above listed content can be found in Apple's ‌App Store‌, Music, Books, Podcasts, and TV apps.

calzon65
I think many parents are losing the minds with kids wanting something to do ... credit to Apple for this offer.
Score: 2 Votes (Like | Disagree)

orbital~debris
Helpsters and Snoopy in Space are both excellent programmes. My children have watched them lots already (and re-watched during the lockdown).
Score: 1 Votes (Like | Disagree)

iDento
As someone who works in the medical field, I want to thank each person who’s trying to help especially those who are making the life of children easier as it is really hard for them to understand what a curfew is. We all need to stand together in these times, I’m no American but we’re all living in the same planet. Albeit, some people have cravings for weird recipes including bats and they need to find alternatives, that we can’t help with as only they know how a bat tastes.
Score: 1 Votes (Like | Disagree)

This is a joke. The apple tv shows havent changed since apple launched tv plus. They should have both delivered more content and made some content free by now. This is just a publicity stunt.

There is way more in that kids section than stuff from Apple TV+ - which is btw very reasonable to rent. Sure, doesn’t contain that much stuff, but that’s a well documented issue.

This is about providing some curated options for family / children entertainment - they don’t have to give out presents though.
Score: 1 Votes (Like | Disagree)
Read All Comments