A new study conducted by driving academy and UK independent road safety charity IAM RoadSmart suggests that using Apple CarPlay while driving is more dangerous than texting or holding a phone to converse. 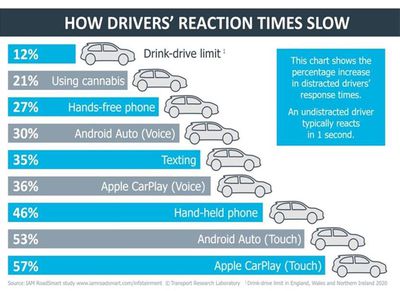 The study found that using ‌CarPlay‌ or Android Auto with touch control caused drivers to struggle with controlling the vehicle's position in the lane and keeping a consistent speed and headway to the vehicle in front. Some of the study's other findings:

It's worth noting that this ‌CarPlay‌ test involved just 20 participants, with 20 other participants using Android Auto, which is a small test group and may not be representative of the usage experiences of all ‌CarPlay‌ owners.

It's also not clear how familiar the participants were with the ‌CarPlay‌ interface before beginning the test or whether they had used it prior to the testing, but IAM RoadSmart says there was a "comprehensive familiarization process."

The test consisted of asking participants to complete three drives on the same simulated test route: a control drive, a voice-enabled drive (interacting with ‌CarPlay‌ via voice commands) and a touch-enabled drive (using ‌CarPlay‌'s touch controls only).

The route included two music-related tasks accessing music on Spotify and BBC radio while following behind a car (2.4 miles), two navigation tasks to a restaurant or a petrol station in a simulation of erratic motorway traffic (5.6 miles), and a figure eight loop done while reading texts and making a call (two miles).

Each participant was asked to react by flashing their lights when a red bar appeared on the screen, which was done to measure reaction time to an external event. These red light flashes appeared at four times during the drive when the driver was engaged with ‌CarPlay‌.

Given the results of the study, IAM RoadSmart is calling on industry and government to "openly test and approve" ‌CarPlay‌ and Android Auto to develop "consistent standards that genuinely help minimize driver distraction." The full distracted driving study conducted by IAM RoadSmart can be read on the company's website [PDF].

hikin_man
Since Siri cannot understand a simple request 80% of the time, I can understand how this could lead to a distracting environment. Attention is required to make sure the AI can understand your request, or transcribe a dictated message. There are also so many bugs in this system, it usually requires troubleshooting when using CarPlay.
Score: 46 Votes (Like | Disagree)

TonyC28
I should read the study before offering an opinion, but I won't...
You will not convince me that using your voice to control something is more dangerous than looking down at your lap and texting.
Score: 32 Votes (Like | Disagree)

svandive
This has to be the most non-intuitive findings I have ever seen. I simply can not hold any validity to these findings.
Score: 26 Votes (Like | Disagree)

DoctorTech
Too many variables and too small of a sample size to draw any meaningful conclusions. Were the CarPlay participants already familiar with CarPlay or were they trying to figure it out as they went? Also, I would seriously LOVE to see how these slowed reaction times compare to carrying on a conversation with an in-vehicle passenger and dealing with children in the backseat.
Score: 16 Votes (Like | Disagree)

avanpelt
Based on my experience, using Siri via CarPlay can be incredibly frustrating. That's especially the case when trying to listen to a radio station.

Since I can't see the transcription of what Siri *thought* I said with CarPlay (like I can on iPhone or iPad), I'm not really sure how to compensate for the fact that it didn't do what I wanted. Do I need to annunciate a particular letter more clearly? Do I need to slow down when I'm speaking? I have no idea. Sometimes, I have to repeat the same command five or six times before it finally does what I wanted it to do. Am I distracted during that time because my level of frustration with Siri is growing each time it gets it wrong? Probably.
Score: 10 Votes (Like | Disagree)
Read All Comments