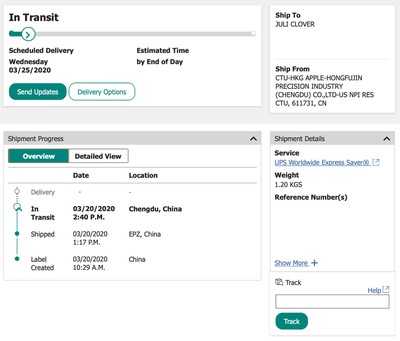 The first iPad Pro orders are expected to start arriving to customers on Wednesday, March 25, and to make sure the tablets reach consumers on time, Apple has begun shipping the new ‌iPad Pro‌ models from China.

Apple is not yet providing shipping details through its own tracking system, but customers in the United States who are receiving their packages through UPS can use the track by reference feature with a phone number or an order number to track their packages.

UPS My Choice, which displays upcoming deliveries in a calendar view for those who sign up for an account, also lists ‌iPad Pro‌ shipments that are in transit at the current time. Signing up for a UPS My Choice account is free.

While the new 11 and 12.9-inch ‌iPad Pro‌ models are expected to arrive next week, the new Magic Keyboard with trackpad that Apple debuted alongside them is not going to be available for purchase until sometime in May.

mi7chy
CoronaVirus can live on surfaces for several days so I'd choose the slowest delivery option just to be cautious.
Score: 13 Votes (Like | Disagree)

now i see it
^ This info is from CDC regarding risk of receiving imported packages:

Ursadorable
I'm holding off until I hear if the bending issues have been resolved.
Score: 10 Votes (Like | Disagree)

dontwalkhand
I love how this can arrive totally on time but I still can't find any toilet paper.
Score: 8 Votes (Like | Disagree)

^ This info is from CDC regarding risk of receiving imported packages:

Most likely source of infection will be from domestic UPS workers. The number of cases in the U.S. is rising exponentially and there's no PPE. While China is swimming in PPE and has no new reported cases.

For people who are concerned, they should sanitize their deliveries from UPS and ask the driver to leave it at the door.
Score: 5 Votes (Like | Disagree)

The victim blaming from ministry of misinformation. Imagine someone with STD/HIV, not notifying partners for several months, knowingly infected people, silenced those that got infected then blamed the victims. There are local laws against that and it should be expanded on a global scale.

Nothing to do with blaming. Right now, it's about slowing community infections.

The reality is, telling people to choose the "slowest delivery option just to be cautious" is meaningless given there are 16,000+ cases in the U.S. Even Canada has closed the U.S. border. The most likely source will be the UPS delivery person.
Score: 5 Votes (Like | Disagree)
Read All Comments

Friday May 14, 2021 11:52 am PDT by Juli Clover
Following the discontinuation of the iMac Pro, Apple also appears to be discontinuing Space Gray "Magic" accessories that it sold separately alongside the iMac Pro. The iMac Pro was the only Space Gray Mac, and Apple designed special matching accessories for it. The Space Gray Magic Mouse 2, Magic Keyboard, and Magic Trackpad all now say "While supplies last" in small wording at the bottom...
Read Full Article • 300 comments