Apple today announced that iPadOS 13.4 will feature trackpad support for all iPad Pro models, the iPad Air 2 and later, the fifth-generation iPad and later, and the iPad mini 4 and later. The software update will be released on March 24.

Trackpad support paves the way for Apple's new Magic Keyboard for 2018 and later iPad Pro models, coming in May, as well as third-party options. 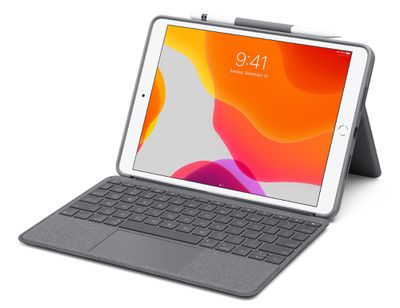 Logitech's new keyboard with built-in trackpad for 10.5-inch iPad Air
Logitech today introduced new keyboard cases with built-in trackpads for the 10.2-inch iPad and the 10.5-inch iPad Air, both priced at $149.95 in the United States. The keyboards have been listed on Apple's online store, although they are not yet available. The keyboards will connect to the Smart Connector on each iPad, with no batteries required.

The full-sized keyboards feature an integrated trackpad with Multi-Touch gesture support, backlit keys, a full row of iPadOS shortcut keys, a kickback stand with 50-degree tilt, and four usage modes for typing, viewing, reading, and sketching. The case adds some protection to the iPad and includes a holder for the original Apple Pencil or Logitech Crayon.

We'll provide an update when the keyboards are available to order.

robbieduncan
I wish they'd make one for the older generation 12.9" iPad. I've not seen any options for them
Score: 3 Votes (Like | Disagree)

magicschoolbus
Will this work for the 10.5 pro?
Score: 1 Votes (Like | Disagree)

Interestingly, they have a different depth than the 10.2" iPad, so I'm not sure how well that case will fit.
Score: 1 Votes (Like | Disagree)

They are 2 totally different devices. One is for the 7th Gen Ipad and one for the 10.5 devices. If you click the links it shows that
Score: 1 Votes (Like | Disagree)

I have to same question but since both iPads have the same dimensions I bet the answer is yes.
Score: 1 Votes (Like | Disagree)

You're misunderstanding what I'm looking for.
I don't want to have to use any case on my iPad itself.

Doesn't the Logitech solution, while detachable, require the use of their case on the iPad itself?
(please forgive me if I'm wrong on that)

I'd like a docked solution that just makes use of the Dock Connector port and supports naked iPad usage.

The only reason it would require it is to stop the ipad from falling over backwards (for the kickstand element).

If you have a solution for that... it should work. The fact it's detachable from the case means the case has no link at all to the smart connector. It's like a 2 piece kit rather than a single item.
Score: 1 Votes (Like | Disagree)
Read All Comments