Classicbot, known for its line of Apple-inspired plush toys and figurines like the iBot G3, today introduced its newest figurine, the iBoy, which has been designed as an homage to Apple's 2001 iPod Classic. 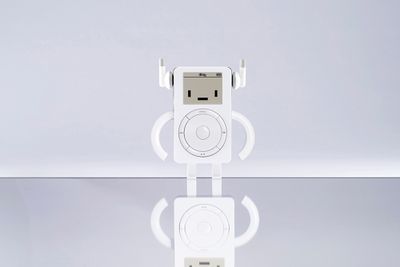 Available for pre-order on Kickstarter, the iBoy, created by designer Philip Lee, is a cross between a robot and an iPod with a functional rotating click wheel, a mirror-like chrome finish on the back, antenna formed from EarPods, and magnetic arms.

There are no electronic parts inside as the iBoy is meant to be a figurine for display, but it does look like a functional MP3 player. With the magnetic limbs and EarPods pulled off, it can convert from robot mode to an MP3 player mode that more closely resembles the iPod.

While the rear of the iBoy has the chrome finish at the back, the body is made from an iPod-like glossy white ABS plastic, silk-screened details complete with ports, clickable buttons, and the aforementioned click wheel that actually turns.

Though we often shy away from sharing Kickstarter projects because of issues with production and oft-delayed release dates, Classicbot's Philip Lee has an established storefront and experience making many other similar toys.

The first iBoys are expected to be released in November 2020, and the earliest pre-order customers on Kickstarter can pick one up for HK$ 229, which is about $30 in U.S. currency. iBoys will come with a series of limited-edition mini posters featuring the iBoy in different poses and environments.

Update: With the project fully funded, Classicbot is adding a new black color option for users to choose from. Backers will be able to select a black iPod with a red dial, modeled after the U2 edition.

JtheLemur
Holy cow. I'm so sorry, that so many of you, are so damn miserable.
Score: 12 Votes (Like | Disagree)

Holy cow. I'm so happy that so many of you, are so damn sensible.

In these trying times it is easy to be somewhat hardened and lose our whimsy.

Agreed. Why shouldn’t adults have toys? It’s cheap enough and something I’d put on my desk at work as a conversation piece.
Score: 4 Votes (Like | Disagree)

JBGoode
I usually would never bash a product that I have no interest in because I'm a 'to each their own' type of guy, but I cannot imagine for the life of me why anyone would pay $30 for this piece of crap that serves no purpose other than to be a decoration that looks like an iPod. Small children would have no interest in it because they have no clue what an iPod is and I would hope that an adult would realize this thing is worth 5 bucks at best.
Score: 4 Votes (Like | Disagree)

braddick
In these trying times it is easy to be somewhat hardened and lose our whimsy.
Score: 3 Votes (Like | Disagree)