Apple shipped more than 43.4 million wearables in the last quarter of 2019, according to data compiled by research firm IDC (via DigiTimes). 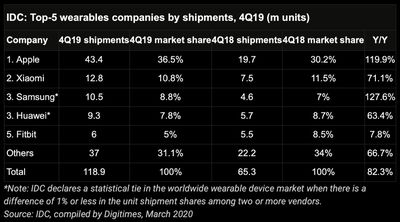 The figures for Apple include unit shipments of Apple Watch, AirPods, AirPods Pro, and its Beats lineup. Taken together, the data suggests Apple had a 36.5 percent share of the wearables market. The only blot on its report card was a slight decline in Apple Watch shipments over the quarter because of supply shortages.

"2019 marked a strong step forward for the worldwide wearables market," said Ramon Llamas, research director for IDC's Wearables Team. "Hearables were the big story due to new product introductions and more smartphones cutting the cord with traditional earphones, practically driving users to purchase a hearable. Not to be overshadowed were smartwatches and fitness trackers, which both posted record annual volumes from an abundance of lower-cost models."

The global wearables market grew by 82.3 percent in the fourth quarter of 2019, reaching a new high of 118.9 million devices shipped, according to IDC data.

The rapid growth is said to have been mainly due to the increasing popularity of earbuds and headphones, which captured 55.3 percent of the entire market. Other popular categories during the quarter included smartwatches (15.3 percent) and wrist bands (17.7 percent).

Across the whole of 2019, Apple is said to have shipped more than 106 million units in the market, up 121.7 percent from the previous year.

DigiTimes sparked interest recently by suggesting Apple is planning to launch an "AirPod Pro Lite," describing the earbuds as an "entry-level version of Apple's ‌AirPods Pro‌ series." Apple already offers AirPods for $50 less than ‌AirPods Pro‌, so it's unclear how "‌AirPods Pro‌ Lite" would fit into Apple's lineup.

According to Apple analyst Ming-Chi Kuo, Apple is also prepping new high-end over-ear headphones to round out its wearable lineup. Icons allegedly representing the Apple-branded headphones were recently found in leaked iOS 14 code.

A Bloomberg report claimed Apple's upcoming over-ear wireless headphones will feature active noise-canceling and launch in the second half of 2019 for the over-ear headphones, but Kuo in January 2020 said that "high-end Bluetooth headphones" would launch during the first half of the year, which could refer to the same product.

djcerla
And this (plus iPhone’s AR) is only the rolling start for the Next Big Thing.

Samsung’s YoY growth is pretty impressive. While their totaled shipped numbers are still significantly lower, they’re showing good growth. I’ve noticed this in the wild too. I have started to see many more of the latest iteration of their watch, unsure of the designation.

They are trying to build critical mass by giving away their wearables, bundled with phones or tablets purchases.
Score: 4 Votes (Like | Disagree)

I think many people underestimate how strategic and forward-thinking Cook's move was/is for Apple. As CEO he deserves a ton of credit. AR is the next step, with a ton of potential.

I agree. He of course doesn't have the vision like Jobs did, but he has been able to get Apple into the right areas for the future. I think he is massively undervalued.
Score: 2 Votes (Like | Disagree)

crcuilla
I guess if we can re-label headphones and ear buds as "wearables" then...

Dave245
The Watch is the best smartwatch on the market so far. I love my Series 4, I'm looking forward to what they announce with this years Series 6.
Score: 2 Votes (Like | Disagree)

DNichter
This really shows just how strong of a move it was for Tim Cook and Apple to pivot away from strictly iPhone a few years back. Wearables are a major category moving forward with a ton of opportunity for growth.
Score: 2 Votes (Like | Disagree)

....I kind of doubt wearables + home will keep growing. My Apple Watch is nice and fine, but I kind of doubt I'll ever replace it. My wife pretty much never wears hers. If Apple Watch were a compelling product that felt like it was worth replacing regularly, sure. But I think it's more likely that it already peaked. The category is growing because of the AirPods, not the Apple Watch, and I expect that will peak fairly soon, ....

Tough to derive a billion+ dollar entire segment based on anecdotal, personal feelings.
Score: 2 Votes (Like | Disagree)
Read All Comments