Apple Pay could soon be available in Mexico, based on reports from iPhone users in Mexico who have been able to add their Banregio cards to the Wallet app. 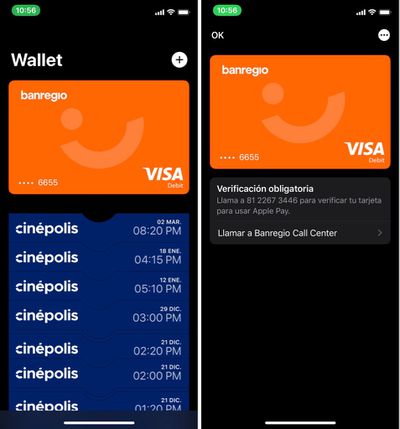 One user on Twitter whose tweet was shared by 9to5Mac was able to add his Banregio card to the Wallet app after setting his region to the United States. The card was able to be successfully added, and there was text included for verification purposes, but the verification process did not work as ‌Apple Pay‌ has not officially launched in the country.

Cards from banks other than Banregio were not able to be added to the Wallet app on the ‌iPhone‌, suggesting ‌Apple Pay‌ in Mexico may be limited to Banregio at launch.

When ‌Apple Pay‌ launches in Mexico, it will be the second country in Latin America to support the payments service. Apple launched ‌Apple Pay‌ in Brazil in 2018, but has not expanded it to other Latin America countries. ‌Apple Pay‌ has also been available in the United States and Canada for years.

Apple maintains a complete list of the countries where ‌Apple Pay‌ is available on its support site, and we have a detailed Apple Pay roundup with everything you need to know about Apple's payments service.

Oh my, didn’t you book all-in? Or better stay home! Mexico is still very much a cash country.. so good luck with it.

I'm sorry but as a Mexican I found this comment hilarious, cards are accepted almost everywhere, even in some street market stalls.
Score: 8 Votes (Like | Disagree)

Trip already planned for Cabo. This will make life much easier.

You will be able to use apple pay in Cabo regardless of whether or not it has launched in Mexico by the time you travel. Apple Pay has worked in Mexico for a long time, just not with any cards issued in Mexico, which is what now seems to be about to change.
Score: 4 Votes (Like | Disagree)

Oh my, didn’t you book all-in? Or better stay home! Mexico is still very much a cash country.. so good luck with it.

Not entirely true. Many places in Mexico do accept credit cards, especially in tourist areas, and their terminals have contactless enabled so they actually can accept apple pay even now. I‘ve been using it regularly since 2016.

Instead of expanding it to other country's why not expand it in the USA? I am finding more and more places that will NOT accept Apple Pay. There are countless stores and restaurants that accept Samsung Pay but NOT Apple Pay.

I noticed tonight on the news W.H.O. is requesting people to pay with contactless payment methods instead of cash and credit cards due to the Coronavirus. I would LOVE to if they would accept Apple Pay.

I'm being told by the merchants that they don't want to pay the Apple Fees that come with Apple Pay. So they have just shut it off. I am starting to make my purchases at locations that ONLY accept Apple Pay. I was at a store the other day and tried today with Apple Pay. The cashier said they didn't accept Apple Pay so I refused the purchase and walked away.

What the merchants told you is a blatant lie. Merchants don’t pay any fees for accepting apple pay. All they need is to have contactless readers and have them enabled, and that’s what many places don’t do in the US: they either they lack such readers or deliberately disable them. Proof of this is that Apple Pay has worked from day one everywhere there is a contactless reader, even in the countries where apple hasn’t officially rolled out the service, and the issue was always which cards can and can’t be added to wallet to be able to use it. Banks do pay a fee to Apple to let their customers add their cards to Wallet, but that’s another story.

I'm sorry but as a Mexican I found this comment hilarious, cards are accepted almost everywhere, even in some street market stalls.

THat’s a misconception many Americans have because they only travel to Puerto Vallarta, a small town where lots of places are still cash only. However, Puerto Vallarta is hardly if at all representative of the credit card situation in Mexico.

As others, I also have been waiting for this for years. But I don't hold my breath for this. Most places, even if the terminals allow it/have the tech, don't have NFC enabled, so even with contactless cards is not possible to pay.

Actually most of the standalone bank-provided POS terminals used in Mexico, as well as many portable devices such as Clip or iZettle already do have NFC enabled. It is only the pinpads used at medium sized and large retailers that have the NFC turned off, but those places can certainly be avoided entirely. We do have enough places where apple pay can be used. We have a lot more than the US did in 2014 when apple pay debuted there.

Will it make it easier for Mexican citizens to send remittances ('https://en.wikipedia.org/wiki/Remittances_from_the_United_States') back to Mexico from money earned while living in the US ?

It does. Mexican nationals living in the US can already send remittances using apple pay through western union’s app.
Score: 3 Votes (Like | Disagree)

techsantos
YEEESSSS been waiting 6 years for this
Score: 3 Votes (Like | Disagree)

I know that Brazil is in South America, surrounded by Latin countries yet is it really still considered a Latin country?

Yes: portuguese is in fact a latin-derived language. So yes, it is a Latin American country. What it is not is an "hispanoamerican", which are the ones related to spanish.
Score: 2 Votes (Like | Disagree)
Read All Comments