A report by the Australian Strategic Policy Institute think-tank has named Apple among 83 other major companies benefiting from the use of potentially abusive labor transfer programs. 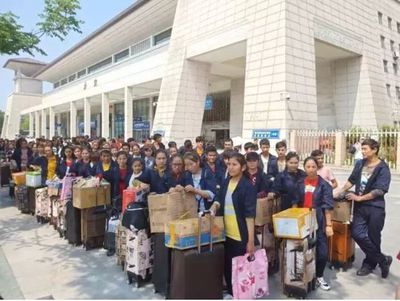 The Chinese government has allegedly transferred thousands of Uyghur Muslims and other ethnic minorities from Xinjiang to factories across the country, implicating global supply chains.

The report estimates that at least 80,000 Uyghurs were transferred out of Xinjiang to work in factories across China between 2017 and 2019, some of whom were sent directly from "detention camps".

Transferred workers typically undergo organized Mandarin and ideological training outside working hours, are subject to constant surveillance and are forbidden from participating in religious observances. The Washington Post has corroborated the report's claims.

China has attracted international condemnation for its network of extrajudicial "re-education" internment camps in Xinjiang.

The report identifies four Chinese factories in Apple's supply chain which use Uyghur labor to make parts for Apple and its suppliers.

O-Film Technology Co., which supplied camera modules for iPhone 8 and ‌iPhone‌ X, and BOE Technology Group, a company set to become Apple's second-largest OLED screen supplier by 2021, both reportedly use Uyghur labor, either directly or through contractors. AirPods supplier GoerTek is also listed.

As many as 560 Xinjiang workers were transferred to factories in central Henan province, including to Foxconn Technology's Zhengzhou facility, which reportedly makes half of the world's iPhones.

Over the past decade, Foxconn has been marred by allegations of worker exploitation and even suicides, including recently at its Zhengzhou facility.

In 2019, Apple released a supplier responsibility progress report, stating that "we hold ourselves and our suppliers to the highest standards to ensure everyone is treated with dignity and respect".

baryon
I feel that this whole "get everything made cheap in China in massive quantities" thing is just the current terrible phase in Human history and just like it happened with slavery in America or the Holocaust, it has to end. This is neither sustainable nor good, and we have to stop turning a blind eye to it. China is revealing itself to be incredibly evil and our dependence on them makes us just as bad. Either the Western world will come to depend on China more and more, and will continue support and facilitate the abuse of human rights there, or they will withdraw and have to rethink their manufacturing chain. Even if companies like Apple start to enforce the respect of human rights, we are still continuing to empower a communist dictatorship by giving them our money and by being dependent on their skill and manufacturing infrastructure. Once China has enough power they can do whatever they want (or maybe it's already the case now).


Either way, there are going to be tensions with such a huge and powerful country. If bad stuff does happen, China and the US/EU will be against each other in a new world war, and it won't be pretty. And people will say "how did we not see this coming?". We saw it coming, but as usual, we just didn't do anything.
Score: 42 Votes (Like | Disagree)

You outsource to China (among others) because it's cheap. It's cheap because they don't have the same standards we have. Don't pretend you don't know this.

This is pretty weak. So it’s some suppliers in Apple’s supply chain that are allegedly using this labor but we don’t know what specific Apple products or components (if any) this labor is involved in. And we have no idea for how long or what steps Apple has taken. Supply chains are incredibly complex. To suggest that every company is responsible for the conduct of every supplier they engage with is nuts. Seems to me Apple is one if the better corporations in this regard with their supplier responsibility report and actions they have taken in the past (and will take in the future).

The fact that all big businesses are just as bad doesn't stop it being bad.
Score: 14 Votes (Like | Disagree)

The fact that all big businesses are just as bad doesn't stop it being bad.

The fact that they sell premium products at ridicolous margins makes it even worse.
Score: 14 Votes (Like | Disagree)

Apple is selfish with respect to ideals. Until their CEO is Muslim, they won’t do anything about it. Now if this was gay labor, there would be an immediate ban on these suppliers.

No, China has oppressive policies toward LGBTQ. And they have a shocking amount of control over the content of our movies. Everyone who screams censorship because Apple was (apparently erroneously) reported to want family friendly content doesn’t realize one of the reasons we haven’t yet seen major characters depicted as gay in the big franchises is due in part to offending sensibilities in China. China is now a huge market for western films and they also wield influence as both consumers and via investment in production ('https://variety.com/2019/film/news/edward-cheng-tencent-pictures-1203246187/#!'). The recent movie about Mr. Rogers is an example of the latter.

Tim Cook knows this. He’s got Apple stores in countries with laws that are hostile to LGBTQ. It’s all business and nothing personal on that front.
Score: 11 Votes (Like | Disagree)

Rogifan
This is pretty weak. So it’s some suppliers in Apple’s supply chain that are allegedly using this labor but we don’t know what specific Apple products or components (if any) this labor is involved in. And we have no idea for how long or what steps Apple has taken. Supply chains are incredibly complex. To suggest that every company is responsible for the conduct of every supplier they engage with is nuts. Seems to me Apple is one if the better corporations in this regard with their supplier responsibility report and actions they have taken in the past (and will take in the future).
Score: 8 Votes (Like | Disagree)
Read All Comments