Over the last 48 hours, Apple Maps has expanded its transit directions coverage across Europe. Using the app, travelers in cities across France, Germany, Spain, and possibly other countries in the EU are now able to access departure times and transit routes for various modes of public transport including buses, trams, metro trains, and more. 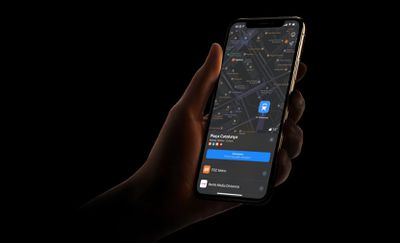 Screenshot credit: @guillamet
Apple has yet to update its official list of locations for which Maps offers Transit data, possibly because some of the real-time information is still being deployed. There have been a few reports that some cities in the aforementioned countries are still displaying uneven transit coverage.

Google Maps has supported transit directions for several years now, but ‌‌Apple Maps‌‌ has been steadily catching up with detailed routing information in recent years.

Transit coverage began in 2015 with an initial rollout in Baltimore, Berlin, Boston, Chicago, London, Los Angeles, Mexico City, New York, Philadelphia, San Francisco, Sydney, Toronto, and China. Since then, Apple has expanded the feature to many other regions around the world.

Think we've got it even though we're not European ;)

Think we've got it even though we're not European ;)

Excellent idea. Apple should install speed cameras everywhere taking photos of everyone using Google or Waze and exceeding the speed limit. Everyone will switch to Apple Maps.

I think Apple should just randomly show cameras all over the place in Maps, to slow down those speeding id!ots. :p
Score: 3 Votes (Like | Disagree)

Apple Maps will never make inroads against Google or Waze until they start including speed cameras, at least in the UK.

Excellent idea. Apple should install speed cameras everywhere taking photos of everyone using Google or Waze and exceeding the speed limit. Everyone will switch to Apple Maps.
Score: 3 Votes (Like | Disagree)

TobiWahn_Kenobi
Nothing in Austria again...
Could we please also have this. And Siri in AppleTV. And Television Series in AppleTV/iTunes? And HomePod? Oh Apple you....
Score: 2 Votes (Like | Disagree)

MinEderPlayz
I love How some people immediately managed to derail the conversation from European transit to CarPlay and speed traps. Typical car-centric culture at work.

Anyways, I'm really glad to finally see transit directions rolled out across Germany, after it has been rumored to come 'any day now' for months. I'll still have to check the local apps for delays sadly, but on non-critical routes/connections Apple Maps will be my go to now as I just like the interface and directions more than any of the other apps I've tried (Citymapper, Moovit, Transit, Google Maps, ...)
Score: 2 Votes (Like | Disagree)
Read All Comments