Last week, BlueMail co-founders Ben Volach and Dan Volach penned an open letter that encouraged any developers who feel that Apple kicked them out of the App Store or has treated them unfairly to share their stories. 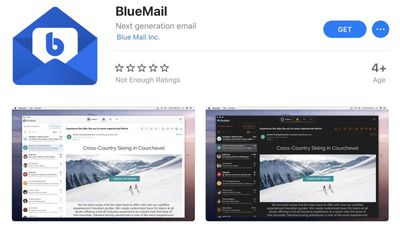 Apple has since responded to the matter, refuting many of BlueMail's claims and noting that its App Store Review Guidelines apply evenly to all developers.

In a statement last week, shared with MacRumors, Apple said it "attempted on multiple occasions to assist them in getting their BlueMail app back on the Mac App Store," but said "they have refused our help." Apple added that BlueMail was "proposing to override basic data security protections which can expose users' computers to malware that can harm their Macs and threaten their privacy."

Just days later, however, BlueMail has returned to the Mac App Store, which BlueMail said is "proof that speaking out works."

Apple's response, however, suggests that BlueMail refused to take the necessary steps for its app to be reinstated on the Mac App Store until now.

Specifically, Apple says its Developer Technical Support team advised the BlueMail team to make changes to how it packages its Mac app in order to resolve a security and privacy warnings issue related to the app creating a new binary with a bundle ID that changes on each launch.

Apple says that BlueMail finally submitted a revised version of its app with an updated binary respecting Gatekeeper on February 7, two days after its open letter to developers. Apple says its App Review team found that the previous issues had been addressed, allowing it to return to the Mac App Store as of Monday.

Nevertheless, BlueMail parent company Blix today said it has no intention of dropping its legal case against Apple, which it believes extends beyond the removal of BlueMail on the Mac App Store to the "suppression of its iOS app" and the "infringement of Blix's patented technology through 'Sign in with Apple.'"

"We're happy that users can once again get BlueMail through the Mac App Store, but we know this isn't the end. Our experience has shown that until the app review process includes effective checks and balances, Apple holds too much power over small developers," said Ben Volach, co-founder at Blix. "One solution could be to include external independent members and observers in Apple's App Review Board, just as a public company's Board of Directors represents its shareholders."

BlueMail parent company Blix's lawsuit against Apple, filed in October 2019, alleges that the "Hide My Email" feature of "Sign in with Apple" infringes on its patented technology. The complaint also accuses Apple of anticompetitive behavior, including removing BlueMail from the Mac App Store at the time.

farewelwilliams
So you failed to comply with standard security guidelines and you're whining about it. Thanks, but I'll never use BlueMail.
Score: 24 Votes (Like | Disagree)

dvanwinkle
As a developer, I sometimes get frustrated with Apple's policies as well. But the tradeoff is as a user, I am happy that if someone is trying to be a bad actor, they are often limited to their sandbox and Apple takes care of them quickly. They even did the same thing to Facebook. Every time I see a company like BlueMail whining, it's obvious to me that the developers should just stick with Android and Windows to get away with things they want to get away with.

The right way isn't to cry foul when you're caught doing something bad. The right way is to open a conversation with your Apple Developer Relations contact and work with Apple to either change policy or understand if your business is going to work in the Apple ecosystem. Suing them for upholding their own policies and rules is like suing your landlord when you are breaking the lease, the judge is going to laugh and throw it out, while you're making no one but lawyers richer.
Score: 13 Votes (Like | Disagree)

pike908
I find it highly unlikely that Apple caved because Bluemail complained in the press. Apple doesn't even cave to public pressure from the state of CA nor the U.S. Government.

The only "entity" that Apple rolls over for is the Chinese Government...
Score: 8 Votes (Like | Disagree)

mannyvel
Why would they change their binary after they launched? That implies they're pulling new versions of their app down occasionally, which is a great way to bypass gatekeeper.

Why would they do this?
Score: 5 Votes (Like | Disagree)

So you failed to comply with standard security guidelines and you're whining about it. Thanks, but I'll never use BlueMail.

If only it was that simple.
Score: 4 Votes (Like | Disagree)

coumerelli
“The one who states his case first seems right, until the other comes and examines him.”
‭‭Proverbs‬ ‭18:17‬ ‭ESV‬‬
Score: 3 Votes (Like | Disagree)
Read All Comments