After Suing Apple, BlueMail Calls on Other Developers 'Kicked Out' of App Store to Join the Fight [Updated]

Back in October, the developers behind email app BlueMail sued Apple, alleging that the "Hide My Email" feature of "Sign in with Apple" infringes on its patented technology. The complaint [PDF] also accuses Apple of anticompetitive behavior, including removing BlueMail from the Mac App Store. 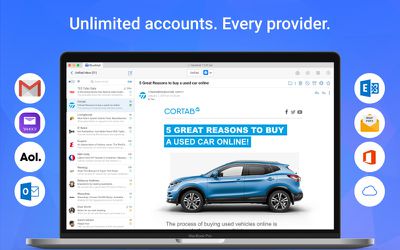 "Hide My Email" hides a user's personal email address by substituting it with a unique, random email address when setting up an account in an app or on a website that supports "Sign in with Apple."

Apple explains how the feature works in a support document:

For example, if j.appleseed@icloud.com is your Apple ID, your unique, random email address for a given app might look like dpdcnf87nu@privaterelay.appleid.com.

Any messages sent to this address by the app or website developer are automatically forwarded to your personal email address by our private email relay service. You can read and respond directly to these emails and still keep your personal address private.

After writing a public letter to Apple CEO Tim Cook, BlueMail co-founders Ben Volach and Dan Volach said that they were contacted by Apple within a few hours, but they claim that the correspondence was merely a delay tactic.

We were overjoyed when we heard back from Apple within the day – within just a few hours in fact. It seemed to share our desire for a mutual solution and we worked quickly to meet its requests, but these too were just tactics meant to delay us.

Rerouted to teams that didn’t respond for weeks, told outright that our app doesn't run on macOS Catalina when we can prove it does, and given contradictory guidance from different teams within Apple, we found ourselves back at square one. Perhaps even worse than square one, because Apple’s legal team saw our willingness to work together as weakness and strengthened its stance against us.

Now, the Volach brothers have penned an open letter to the developer community, encouraging any developers who feel that Apple has kicked them out of the App Store or otherwise treated them unfairly to reach out to BlueMail and share their stories.

If any of that sounds familiar to you, if Apple has kicked you out of its App Store, used its developer guidelines to control your innovation, hijacked your store ranking, or (let's be honest with each other) lied to you while it steals your technology, it's time to talk. Even if you're not sure you want to go through with it (because we know how scary it can be), tell us your story. We won't share anything about you without your consent.

A lot of attention was placed on the congressional hearings in Colorado on January 17, but there are many who don't have the standing of Sonos or Tile. Together, we will have a voice.

We want to be back on the App Store, but we also want fairness. For us. For you. For all developers. Take a stand with us and email fair@bluemail.me with your experience.

BlueMail was removed from the Mac App Store in June 2019, the same month that Apple introduced "Sign in with Apple." In a nutshell, Apple found the app to be violating several App Store Review Guidelines, but the Volach brothers disagree and are now looking for other developers similarly situated to bolster their case.

BlueMail remains available on other platforms, including iOS and Android.

Update — Feb 11, 2020: BlueMail has returned to the Mac App Store. In a press release, BlueMail parent company Blix said it has no intention of dropping its legal case against Apple, which it says extends beyond the removal of BlueMail on the Mac App Store to the "suppression of its iOS app and the infringement of Blix's patented technology through 'Sign in with Apple.'"

"We're happy that users can once again get BlueMail through the Mac App Store, but we know this isn't the end. Our experience has shown that until the app review process includes effective checks and balances, Apple holds too much power over small developers." said Ben Volach, co-founder at Blix. "One solution could be to include external independent members and observers in Apple's App Review Board, just as a public company's Board of Directors represents its shareholders."

zorinlynx
I was creating forwarding addresses to hide my email from spammers twenty years ago. it's nothing new.

So tired of patent trolls.
Score: 27 Votes (Like | Disagree)

I was creating forwarding addresses to hide my email from spammers twenty years ago. it's nothing new.

20 years ago you weren't automating the process for the average consumer though. You certainly didn't patent it. They did and they did. Do they have a legit case? IDK. I do know what you wrote isn't really an effective counter to their claims.

So tired of patent trolls.

Patent troll? Do you know what that term means? Whether they have a valid case or not they certainly don't fit the description of a patent troll.
Score: 16 Votes (Like | Disagree)

az431
Yawn. The use of private APIs is clearly prohibited. They knew that, they ignored it, and the app was pulled.
Score: 16 Votes (Like | Disagree)

20 years ago you weren't automating the process for the average consumer though. You certainly didn't patent it. They did and they did. Do they have a legit case? IDK. I do know what you wrote isn't really an effective counter to their claims.

Patent troll? Do you know what that term means? Whether they have a valid case or not they certainly don't fit the description of a patent troll.

it's called prior art

lots of cools stuff done in the 90's that's largely forgotten now and some people think they created something new
Score: 11 Votes (Like | Disagree)

20 years ago you weren't automating the process for the average consumer though.

What automation are you talking about? Generating a random string? Nothing patentable there - personal mail servers and email forwarding services with various naming schemes have been around for a long time.
Score: 10 Votes (Like | Disagree)
Read All Comments

Sunday May 15, 2022 5:59 am PDT by Joe Rossignol
Earlier this week, well-known Apple analyst Ming-Chi Kuo claimed that Apple plans to release at least one iPhone 15 model with a USB-C port in 2023. Now, in a follow-up tweet, he has claimed that accessories like AirPods, the MagSafe Battery Pack, and the Magic Keyboard/Mouse/Trackpad trio would also switch to USB-C in the "foreseeable future." Both the iPhone and all of the aforementioned...
Read Full Article • 160 comments