The second beta of iOS 13.3.1, released earlier this month, includes a toggle for disabling the Ultra Wideband chip in the device.

Found by Twitter user Brandon Butch (via 9to5Mac), the toggle can be found by opening up the Settings app, selecting Privacy, choosing Location Services, selecting System Services, and then toggling off the "Networking & Wireless" option. 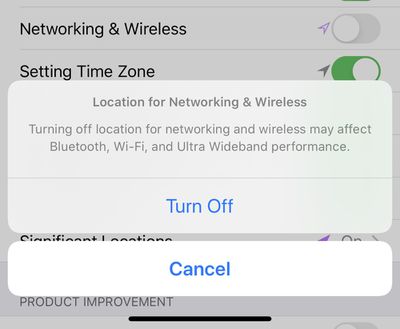 Disabling this feature warns that Bluetooth, Wi-Fi, and Ultra Wideband performance will be affected.

Apple added this toggle in the beta after it was discovered that the iPhone 11, 11 Pro, and 11 Pro Max continue to track user location even when location services toggles are disabled.

Apple said that this was expected behavior due to the Ultra Wideband chip and that the ‌iPhone‌ was operating as designed explaining that location data needed to be used because there are international regulatory requirements that mandate the U1 chip be disabled in certain locations.

Ultra wideband technology is an industry standard technology and is subject to international regulatory requirements that require it to be turned off in certain locations. iOS uses Location Services to help determine if ‌iPhone‌ is in these prohibited locations in order to disable ultra wideband and comply with regulations.

The management of ultra wideband compliance and its use of location data is done entirely on the device and Apple is not collecting user location data.

Apple at the time promised to add a toggle to allow customers to disable the U1 chip entirely, and that toggle will be available to everyone after the release of iOS 13.3.1.

Yeah except when Apple Services is using location services it stays on device. Just saying, there's a reason I'm not as anxious to restrict location access for all of iOS as I am for third-party apps and services.

The ounce of prevention (acknowledgement of the UWB exception beforehand ) would have been better than the pound of cure (explanation of why it does what it does afterwards and toggle solution).
Score: 17 Votes (Like | Disagree)

SDJim
Yeah except when Apple Services is using location services it stays on device. Just saying, there's a reason I'm not as anxious to restrict location access for all of iOS as I am for third-party apps and services.
Score: 10 Votes (Like | Disagree)

I don’t want to use this chip and I appreciate that they are letting us turn it off. I wish the neural engine were also a chip that I could turn off. Every time I see that it’s been snooping around in my pictures again, I want to open my phone, find the little beast, and gouge its eyes out with a sharp object. I think it’s strange that Apple forces face recognition and other artificial intelligence intrusions upon us. It’s an invasion on my privacy, even if it’s only phycological.

And this is such a non-issue. The claim that this particular use of location services drains your battery in any significant way is unsubstantiated; seriously, show me this one function makes more than 1 second difference in a day and I would be shocked. The fact the location information doesn’t leave your phone makes the invasion of privacy argument moot. And the argument that Apple should have explained this to everyone in the first place ignores the fact it is a complete non-issue that, despite being now explained in full, a significant number of MR readers still can’t grasp the basics.

69Mustang
Since Apple controls the hardware and software stack, I think it would be neat if you could ask Siri about processes on your phone. Something like: "Siri, has my GPS been in use within the last xx timeframe?" If the answer is yes, Siri lets you know when and by what app or process. Seems like something that's within the realm of possibility.

now i see it
Why is it that it always takes an Internet tech blogger to identify some hidden, undocumented, sneaky behavior in the iPhone (iOS 10 battery throttling etc) and then apple suddenly coming to the rescue to fix the "intended behavior" once they're found out?
Score: 8 Votes (Like | Disagree)
Read All Comments