LE Audio features a new high-quality, low-power audio codec that will bring improved performance and better power consumption by offering high-quality audio even at low data rates. Developers will be able to create audio products that offer longer battery life or are smaller thanks to the need for less battery capacity. 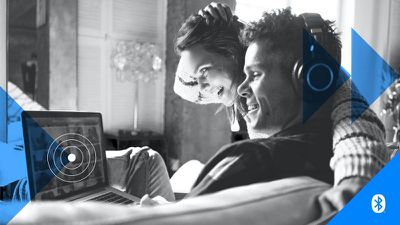 With support for multi-stream audio, Bluetooth LE will allow for the transmission of multiple, independent, synchronized audio streams between an audio source device like a smartphone and one or more audio sink devices like earbuds. This will improve performance of wireless earbuds, offering a better stereo imaging experience, plus it will make it easier to use voice assistant services and swap between multiple audio sources.

LE Audio includes support for hearing aids, and it will allow for the development of hearing aids that also include the benefits of Bluetooth audio.

Bluetooth Audio Sharing will allow people to share their Bluetooth audio experience with others around them (i.e, listening to music from the same smartphone), and there's also a location-based feature that will let public venues like airports, bars, gyms, and cinemas share Bluetooth audio that "augments the visitor experience."

"Location-based Audio Sharing holds the potential to change the way we experience the world around us," said Peter Liu of Bose Corporation and member of the Bluetooth SIG Board of Directors. "For example, people will be able to select the audio being broadcast by silent TVs in public venues, and places like theaters and lecture halls will be able to share audio to assist visitors with hearing loss as well as provide audio in multiple languages."

Apple, a Bluetooth SIG member, has already enabled audio sharing functionality with its AirPods and Powerbeats Pro headphones, but that functionality is specific to iOS devices and a limited number of earbuds. LE Audio will bring those capabilities to all headphones that have LE Audio support.

The Bluetooth specifications defining LE Audio will see a release throughout the second half of 2020. More information about LE Audio is available on the Bluetooth SIG website.

Fun fact: You don't actually have to throw away your old equipment when new one is released. It'll still work just fine!
Score: 10 Votes (Like | Disagree)

christarp
To anyone thinking of waiting for this in new earbuds: The specification is being released in the later half of this year. It will probably be another year or 2 after that before it's implemented in products that you can buy.
Score: 9 Votes (Like | Disagree)

Is there any advancement on lower delay?
I'd like to use bt for monitoring video camera's audio and Apple does not support any aptX, do they?

There's no latency problems watching video on any modern smartphone because the phone will delay the video to sync up. The main issues are with gaming.
Score: 5 Votes (Like | Disagree)

From what I read on the internets, all of the above are increased by at least a factor of 100 to 1000. However, chem trails are almost entirely eliminated, as is cancer from windmills. So overall I think it’s worth it. ymmv.
Score: 4 Votes (Like | Disagree)

I know. I read. I repeat: not an issue. Network buffering and compression latency (H.264 and whatever audio codec you're using) is far greater than the 100 ms of Bluetooth audio.

In fact, you should not use aptX because you don't stream aptX from a video camera. You should have the video camera compress audio into AAC, and Airpods can decode that natively, eliminating a whole round trip compression.
Score: 4 Votes (Like | Disagree)