Dutch brand ZENS today announced the availability of its AirPower-like wireless charging mat with 16 overlapping coils, allowing two devices to be charged anywhere on the mat. 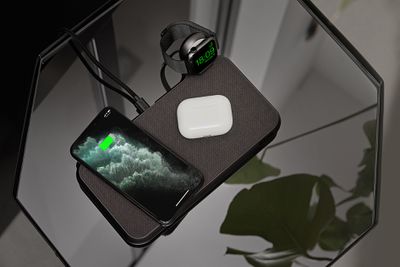 The ZENS Liberty can charge any Qi-enabled devices, with the 16 coils providing a total output of 30W (2x15W) as well as supporting Apple and Samsung Fast Charge. Meanwhile, the built-in 2.4A USB port can be used to charge another device, including an Apple Watch using the optional Apple Watch USB-stick accessory.

The 16 overlapping charging coils give complete freedom of placement, allowing you to place two devices anywhere on the charging pad. For those who were wondering why the USB-port of the Liberty is placed on the top side of the charging pad, the Apple Watch USB-stick is the reason why. This add-on is specifically made for the Liberty so you can simultaneously charge an iPhone, AirPods and an Apple Watch with the Liberty, the ideal 3-in-1 wireless charger!

The ZENS Liberty has a USB-C connection and comes with a 60W USB-C certified power adapter. Separate power plugs for the E.U., U.K. and U.S. are included to make the adapter suitable for global usage.

The mat is available either with a surface of high-quality woolen upholstery textile (Atlas by Kvadrat) or with a tempered glass surface revealing the overlapping coils within. The fabric version costs $139.99 (€139.99), while the Glass edition costs $179.99 (€179.99). Both models come with a three-year extended warranty. The Apple Watch USB-add-on is available separately for $39.99 (€39.99).

This is the closest alternative to Apple's canceled AirPower mat, which would have been able to charge three devices placed anywhere on the mat, including an iPhone, Apple Watch, and AirPods.

Apple canceled the ‌AirPower‌ in March 2019, stating that "after much effort," the mat failed to achieve the company's "high standards." An earlier report from Sonny Dickson claimed the ‌‌AirPower‌‌ would have been equipped with 21 to 24 coils, but reports claimed the mat suffered from overheating and potentially dangerous electromagnetic interference issues.

Expect a full review of the ZENS Liberty Wireless Charger on MacRumors soon.

Apple has proven to be smart again. The 'AirPower' hype is over, most people know the pros and cons, and few companies will make even fewer dollars. File closed...

that’s a really nice way to put an utter engineering fail... there was nothing smart about failing to launch a product that you announced.
Score: 35 Votes (Like | Disagree)

that’s a really nice way to put an utter engineering fail... there was nothing smart about failing to launch a product that you announced.

Sure there is. If it didn't do what it was supposed to do, it's much smarter to not release than to release a terrible (or unsafe?) product. Sometimes the smartest thing to do is cut your losses and move on.
Score: 21 Votes (Like | Disagree)

I'll wait until the reviews come out on this before buying.

And then I'll wait another couple of months to see if these don't catch fire. Apple cancelling it after probably throwing obscene amounts of money at it trying to make it work must say something about the safety and feasibility of these airpower-like products.
Score: 11 Votes (Like | Disagree)

Why do the coils have to be round?

Can't they make one gigantic rectangle coil so that it fits the whole area? Or at least several smaller ones do they don't overlap and cause heating issues.

I mean, several smaller and non-overlapping coils will work, but then the devices have to be centered on them. If you put your device down so that it lies between two coils, it won't charge. Several inductive chargers already function this way, and have some sort of marking to indicate where you should place your devices.
Score: 9 Votes (Like | Disagree)

Morgenland
Apple has proven to be smart again. The 'AirPower' hype is over, most people know the pros and cons, and few companies will make even fewer dollars. File closed...
Score: 8 Votes (Like | Disagree)