In a retrospective on the technology of the last decade, The New York Times has shared a new interview with marketing chief Phil Schiller, covering the debut of the iPad in early 2010.

Schiller says that the ‌iPad‌ was conceived when Apple began looking at a future computer device that could be sold under $500. Steve Jobs, Apple's CEO at the time, said that to reach that price point, things need to be removed "aggressively." 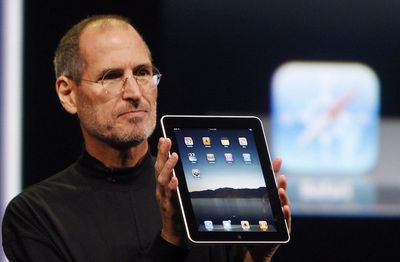 Apple cut the clamshell design and the keyboard, prompting the ‌iPad‌ team to work on multitouch technology, which would go on to debut first in the 2007 iPhone.

And so the team started working on multitouch technology. During that process, a human interface designer, Bas Ording, showed us this demo where he pretended to scroll and the whole screen moved up and down with realistic physics. It was one of those "holy crap" moments.

Apple set the ‌iPad‌ aside to focus on the ‌iPhone‌, but once the second-generation ‌iPhone‌ was launched, Apple returned to working on the tablet form factor. Schiller says that it was "easy to imagine" what needed to be taken from the ‌iPhone‌ to make the ‌iPad‌.

When we got back to the iPad, it was really easy to imagine what to take from iPhone and what needed to be different to create the product it would be. It really helped.

The New York Times piece on the ‌iPad‌ also includes a tidbit from Walt Mossberg, former technology columnist for The Wall Street Journal, who worked closely with Jobs. Jobs invited Mossberg over to his home to show him the new ‌iPad‌ ahead of its launch.

Mossberg says he was impressed with the thinness of the ‌iPad‌, and Jobs was "careful" to demonstrate how it "wasn't just a big ‌iPhone‌." The most impressive part, though, was the price. Mossberg initially guessed $999 when Jobs asked what he thought the ‌iPad‌ might cost, twice the actual $499 price tag.

He gave me this wicked smile, and he said, "You're going to be really amazed if that's what you think. It's way lower than that."

Since the ‌iPad‌ first launched in 2010, Apple has released new versions on a yearly basis, and in 2019, the line has grown to encompass multiple pricing and design choices. There's the 11 and 12.9-inch iPad Pro models at the high-end, the middle tier 10.5-inch iPad Air, the tiny 7.9-inch iPad mini 5, and the low-cost 10.2-inch seventh-generation ‌iPad‌.

The New York Times also looks at several other technological advancements and changes that took place over the course of the last decade, including the development of Siri, Apple's 2016 fight with the FBI, and the 2011 death of Steve Jobs.

Classie
I never get tired of reading stories from Apples development history
Score: 13 Votes (Like | Disagree)

The current-gen iPad is 329$, and you can find that one even cheaper from third-party. iPad mini is 399$ and the Air is 499$. They are all below 500$, except the Pro, but that's not something the average tablet buyer needs, and Apple knows that.

iPads are cheaper than ever before, and they get better every year. Chipset Performance, Display etc...
Score: 12 Votes (Like | Disagree)
Read All Comments